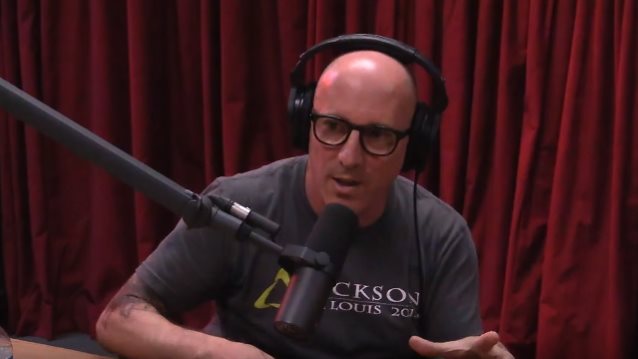 During a recent appearance on "The Joe Rogan Experience", the podcast hosted by UFC personality and stand-up comedian Joe Rogan, TOOL frontman Maynard James Keenan explained for the first time why it is taking so long for the group to get the material written and recorded for its long-awaited follow-up to 2006's "10,000 Days" album.

Speaking about his bandmates, Adam Jones (guitar), Danny Carey (drums) and Justin Chancellor (bass), the singer said (see video below): "Their writing process is so drawn out. And I'm sure there's a lot of reasons why the delay has been long. Their process is very analytical, and I think, at some point, maybe because so much time has gone by from the last album, there has to be a little bit of fear in here. [You think to yourself] 'Is this record gonna be as good as the last one?' The anticipation now is… Now the pressure is huge, so I'm sure there's some of that [that] goes into play.

"As far as the way that Danny and Justin and Adam write, it's a very tedious, long process. And they're always going back over things and questioning what they did and stepping back and going back farther and going forward and, in a way, they're laying a foundation, they're putting in the footings for a house. So I can't write melodies until the footings are in place. I can't write words until the melodies are in place. I can't build walls and then start decorating this place until the foundation is in place. 'Cause if they keep changing the foundation, changing the footings, the melodies change, and then the story, of course, isn't getting written. So that's where we are. There's a lot of footings that keep shifting — lots of awesome footings, but they keep changing. And they keep changing their minds. So I don't know if it's a good thing or a bad thing; it's just their process."

According to Maynard, part of the reason the members of TOOL have taken so long to come up with new material is the fact that they are set in their ways after two decades of commercial and critical acclaim.

"When you have a lot of very strong-willed, stubborn, opinionated people that have had success — myself included — when you give somebody some success, they're pretty convinced they're right," he explained. "So it's hard to talk to me, or it's hard to talk to them, it's hard to talk to people that are in that position, because they've been successful and so you think that the reason you got there is because of whatever position it is you're taking today. Which is fine. But our process has evolved over the years, and that stubborn nature, you try [to] take a step back and not take any of these things personally."

He added: "My desire to move forward — go, go, go — and get things done… I'm always butting heads with the guys in TOOL to get those things done, and it's just not their process. It took a while for me to go, 'This is not personal. This is just the way that they have to do it, and I have to respect it, and I have to take my time and let them take their time.' And I just check in. I come and see what's going on. 'Hey, Justin, send me the track, see where we're at. Is this thing done?' If this thing is done-done-done and I can start writing words and music on it, great. But I've had instances where I've started to write stuff, and by the time I actually got it around and back and we were actually listening and whatever, the song had gone in a completely different direction, so everything that was written, melody-wise or lyric-wise, was completely irrelevant now, and I have to start over…"

Maynard said the fact that he doesn't live in the same state as the other members of TOOL is not to blame for the slow-moving pace of the songwriting sessions. "I mean, I can sit there in that room and be with them in that room, but their process is so tedious and so 'Rain Man' that I just can't… I just start fucking folding in on myself," he explained. "But it's a great thing. What they're doing is a wonderful… I completely back what they're doing. There's no other way for them to do it. For me, I can move much more quickly if you let me help you. But I think this is what they need to do, and I'm okay with it. You've gotta get a little friction in there, so I had to come in and puff my chest out a little bit and be aggressive and, 'Let's move it, guys. Let's move it.' And that works for a minute, and we definitely make traction. But if I were to do that every day, it would just become a part of the friction — more friction rather than actually getting anything done."

Chancellor said in a recent interview on the MetalSucks podcast that TOOL was about "90 percent there" in terms of writing its long-awaited fifth studio album. He revealed: "It's been like a crazy science project — kind of like a petri dish. We've just been really picky over what we want to put on this new album and really want to come up with something completely unique. Plus, we have endless amounts of material to sift through, so it's just been a process."

The band just closed out a North American tour and Chancellor said that being on the road together revitalized them. He explained: "It really is an evolving thing. Being out the last couple of weeks on the road and playing together, this year, we've really kind of hit a new level, I'd say. [We're] really excited to be around each other and we're gonna just bang it out when we get back home, we're ready to go."

TOOL wrapped up its North American dates last month with a mini-festival in San Bernardino, California that also featured acts like PRIMUS, MELVINS, FANTOMAS, CLUTCH and THE CRYSTAL METHOD.