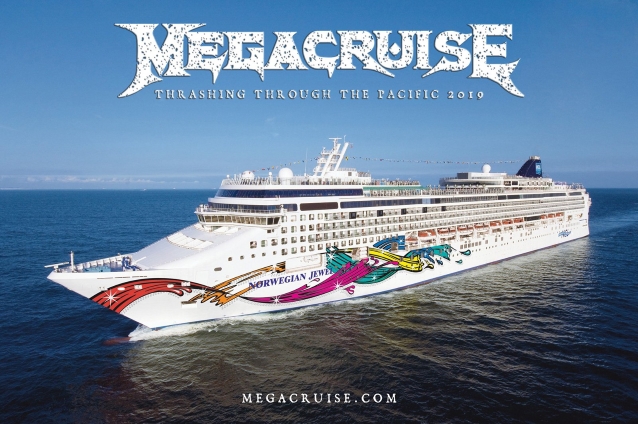 In a recent interview with Classic Rock, promoter Larry Morand — whose company On The Blue produces the annual Monsters Of Rock, Cruise To The Edge and On The Blue music cruises — discussed the inaugural Megacruise, a MEGADETH-branded event that set sail from Los Angeles in October.

Morand said the idea for the cruise originated several years ago during a phone call with the band's booking agent. "[He] said, 'Hey, I just picked up MEGADETH. They were going to do this other cruise [2014's Motörboat] and it didn't happen, but they'd really like to do one,'" Morand said. "I said, 'Would they like to host one?'... At that point, [we had] a bunch of different calls and meetings. It really flourished, and we started to build a marquee around it."

From there, Morand says he curated a list of potential performers for Mustaine's approval. "Dave picked through it," Morand explained. "He wanted to be really hands-on... I thought it would be great to have something that shows the legacy of who they are. He totally agreed, so as we went through it, it was painstaking. It's funny what was curated and what [took] a bit of work."

Morand also discussed the aftermath of Mustaine's throat cancer diagnosis. "We had the discussion with them and had to let them know that rain or shine, that cruise is sailing," Morand said. "The ship will go into that port, and it will go out. It's inevitable. They understood that... We wanted to get [an announcement] out, and that's when the LAMB OF GOD idea came up. We went through some vetting with that and thought that would, in a way, be a fail-safe. We're a company that likes to over-deliver, so we had to take into account that Dave might not be able to make this and make sure that everybody [still] has a good time."