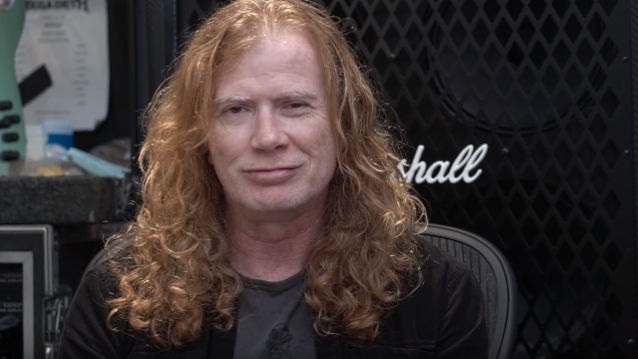 Dave Mustaine has thanked his family, friends and fans for their support in the week since he announced he was diagnosed with throat cancer.

Earlier today, Mustaine released a brief video message in which he said: "Hi. I wanted to take a moment real quick and thank my family, my friends and the best fans in the world for all of your support and love the last few days. We're gonna beat this thing together."

Also today, MEGADETH drummer Dirk Verbeuren posted a new photo of Mustaine in recording studio, along with the caption: "Dave Mustaine working on #megaalbum16 like a true warrior. Let's keep Dave and his family in our thoughts. #davemustaine #megadeth"

Although most of MEGADETH's previously announced 2019 tour dates have been canceled as Mustaine undergoes treatment, the MEGADETH-curated Megacruise — which is set to take place October 13-19 — will still depart as scheduled, and the band will be a part of it in some form.

Mustaine and bassist David Ellefson are the two remaining original members of MEGADETH, which was formed in 1983, following Mustaine's dismissal from METALLICA. Rounding out MEGADETH's current lineup is Brazilian guitarist Kiko Loureiro, who was previously best known for his work with ANGRA.

Dave Mustaine working on #megaalbum16 like a true warrior. Let's keep Dave and his family in our thoughts.
#davemustaine #megadeth