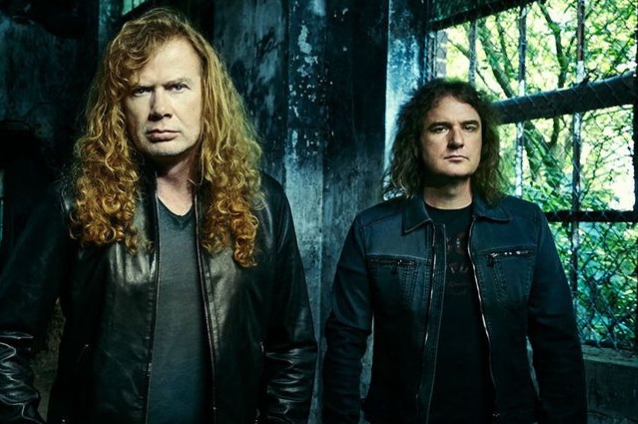 Earlier today (Monday, June 17), MEGADETH bassist David Ellefson spoke to "The Classic Metal Show" in what was quite possibly his first interview since the band's leader, Dave Mustaine, announced his throat cancer diagnosis. You can now listen to the chat below. A few excerpts follow (transcribed by BLABBERMOUTH.NET):

On Mustaine's revelation that he has been diagnosed with throat cancer:

Ellefson: "We were kind of bracing for the bomb today, knowing that we had to get an announcement out about it. Prayers from everybody… Thoughts and prayers are always welcome. Dave has started his treatment. We've been in Nashville for the last almost month and a half working on the [new MEGADETH] album, so we were sort of watching this all unfold before us. And Dave, he has begun treatment, so things are moving forward with that. It just became a reality where it was, like, look, in order to do this treatment properly, follow the doctor's orders, Dave can't be undergoing treatment for cancer and [be] out playing big rock concerts. So we had to say, 'All right. We've gotta just stop. We've gotta clear the deck and put this as the number one priority,' which is what the announcement was today — just addressing it and giving everybody a heads up that some shows are gonna have to go away until this all gets worked out. We are keeping the [Megacruise]. The cruise, I think, is a beast of a different nature, because it's so many people on it, and we're kind of trying to figure out, and we may not totally know MEGADETH's full participation in that until we see where Dave is at with healing after all the treatments and everything by that point. But we're optimistic that on some level, the band or band members, or who knows, maybe even the whole band, maybe we can have a participation on that. In the meantime, we've been working hard on the new album and it's coming along well. I think us getting down there back in May, last month, when we all convened at the studio there — it's like a house that we rented that we're working in. It's nice, 'cause me and Dirk [Verbeuren, drums] and Kiko [Loureiro, guitar] sleep there, and we wake up and all the stacks and gear and Pro Tools and everything's right there in the living room. So you can make music until you go to bed and make music as soon as you wake up or wake up one day and say, 'I don't wanna make any music at all. I'm gonna go stare at the cows on the pasture,' you can do that too. So it's a really good situation there. But we've made a lot of progress on the album, and I think that's something we can continue to do. If Dave hits a wall and needs to take a break just to get off the clock, then we'll do that. But at least we can be working productively and getting some stuff done on the album right now."

On whether the upcoming album will be the first time that Mustaine maybe won't have his finger on every note of a MEGADETH record due to his cancer battle:

Ellefson: "Dave and I have been through our share of the shitshow — just everything that we've gone through. Ups and downs and drug addictions and breakups and makeups and everything else in between that we've been through and the challenges of it all. And, look, this is another one. We're optimistic about, obviously, the treatments. And the success rate is usually pretty good on this one, so I think there's a lot of optimism at the end of this whole thing.

"Look, going through this journey, it can't help but not affect you… And it affects everybody. Cancer is kind of like addiction — it touches the lives of all those around the one who's afflicted; everyone is affected by it to some level. Uncertainty — certainly emotional. And you're right — with Dave always being at the helm and wanting to oversee things… He already has sort of taken the hand off of a couple of things to just, [say] kind of, 'Hey, roll with that and keep me posted. Keep me in the loop.' Take some liberties and roll off of that and see what you guys come up with. And that's really been a beautiful thing.

"One thing about this band is… We are an amazing band. I have not felt this good about the MEGADETH band as I have since probably… certainly the 'Rust In Peace' era and kind of right in the middle of it, like probably 'Youthanasia', which was kind of the middle and the sweet spot of that lineup. That album in particular, because we'd already made two records together and we'd already done two big world tours together. And this lineup has toured almost two and a half, almost three years together. Me, Dave and Kiko, of course, made 'Dystopia'. But Dirk is a great writer. And he's written all this death metal stuff, and this grindcore stuff, and obviously, MEGADETH is quite different from that. But Dirk writes stuff on guitar, and because he's not really a guitar player, he reaches for these very odd intervals on the guitar that probably a normal guitar player wouldn't go for, and as a result, you're, like, 'Dude, that was some really cool note choices you just grabbed right there.' And it's really brought some cool stuff in. And I say that, because I think everybody obviously can't wait to hear Dirk play drums on the album, but I'm here to tell you, one of the fun things that Dirk's brought in is some really kick-ass guitar riffs and some things that we were completely not expecting. And I think that's the fun of making this album right now."

On whether he thinks there is a possibility that there will not be another MEGADETH album, especially with the nature of Mustaine's cancer and Dave being the band's singer:

Ellefson: "Well, I think, at this point, we're optimistic about the treatments. Other cases have shown that it's… throat cancer is treatable. It's at a place where it's certainly, I don't think, beyond a point of repair. So I think it's good, and that's why I think shutting down right now, at least the touring side of it, is good, because I think if we tried to continue to go out and force Dave to sing and perform, yeah, that may not have such a good outcome. And it's funny, I think about it when I broke my foot a couple of years ago — this was three years ago now. The 'Dystopia' tour was just rolling, man, and we were just right in the middle of it, and I freaking break my foot backstage. And I was going, 'Dave, I'll play the next three shows.' And he was, 'No. You're going home. We're going home right now.' He goes, 'If that doesn't heal right right now, you can have lifelong problems. So we've gotta shut down and you've gotta go home.' And we did. And I know some fans, obviously, were upset and disappointed, as you would expect. I would be too, if I was a fan in the audience. But it was real, and we had to do it. So I was thinking about that same thing today with Dave, that the best thing we can do for him, certainly as a singer and as a member of our group, but also as a human, let him… Let's just shut down. Let's take the pressure off of him. And fortunately, the studio, the house that we have is right next door to Dave's property in Franklin [Tennessee] — literally, he can drive his little ATV over there; it's that close. So it's easy enough to be able to check in on stuff. And the days when Dave's feeling good, great. If there's days he's not, hey, no worries. The good Lord has set up a pretty workable scenario that it's not like we're in some situation where we're way behind the eightball on an album or way in debt. Believe me, we've been in those situations before years ago, where it's, like, 'Oh my God.' It's, like, 'We couldn't break up now if we wanted to. We couldn't stop if we wanted to. There's no way out except forward.' And I think we're in a good position now to be able to have this break. And you never know when creativity hits. Sometimes creativity hits in some of your darkest moments. The darkest moments where there's struggle can often bring about some of the greatest music. 'Dystopia' was an album like that. I mean, we'd been through a management change, a lineup change… I mean, we were down to just me and Dave. Everything was completely just in shambles, and out of that, we made a Grammy Award-winning album. Dave's a warrior, he's a fighter, and he's got pretty good sensibilities about when to hit the gas and when to hit the brake. So it's what it needs to be right at this exact time."

MEGADETH has earned its spot as one of metal's most influential and respected acts of all time. Over the course of its illustrious 36-year career, the band has sold more than 38 million albums worldwide, notched six consecutive platinum efforts, seven Top 10 albums, and has earned numerous accolades, including 12 Grammy nominations and a 2017 Grammy Award in the "Best Metal Performance" category for the "Dystopia" title track.

MEGADETH's "Rust In Peace", "Youthanasia" and "Cryptic Writings" albums were all certified platinum, while "Countdown to Extinction" went double-platinum. The latter record, released in 1992, is also the band’s highest-charting release, as it made it to No. 2 on the Billboard 200.