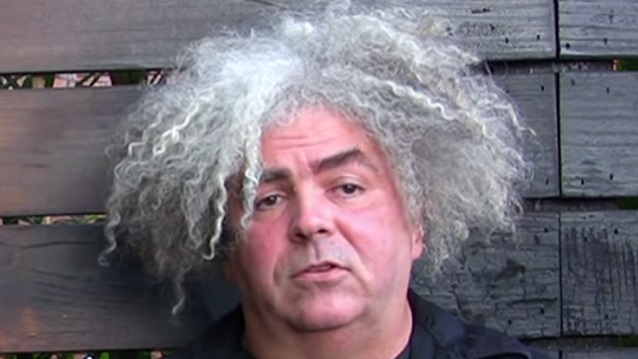 MELVINS frontman Buzz "King Buzzo" Osborne has slammed "all the KISS trolls" on BLABBERMOUTH.NET for "giving [him] shit" over his recent comments about former KISS members Peter Criss and Ace Frehley, saying that he was justified in calling Criss and Frehley "alcoholic junkies."

Asked in a recent interview what he thought of Tommy Thayer and Eric Singer dressing up as Peter Criss' and Ace Frehley's respective "Spaceman" and "Catman" personas (designs owned by KISS leaders Gene Simmons and Paul Stanley) after Ace and Peter left KISS, Osborne said: "I couldn't care . As far as I can tell, Ace Frehley and Peter Criss are fucked-up alcoholic junkie guys. So I don't think Gene Simmons and Paul Stanley should let those two fuck-ups ruin them. Why should they? Okay, they chose to be alcoholics and fuck-ups, now in doing that they have to face the consequences. Gene Simmons didn't do it, why should he face the consequences? That's what I think."

He continued: "I think [Tommy and Eric] should be able to do whatever they want. I don't fault them at all for it.

"It's bullshit music, no one cares. It's not overly important. No music is.

"Music is an extra. It's an extra thing you do in your life. It's not really important. So I take stuff like that with a grain of salt."

Osborne has since expounded on his opinion in a diary post for Noisey. He wrote: "It's been brought to my attention that a lot of angry noise is being blasted on the Internet as a result of some off-handed comments I'd made about KISS. Apparently pissed off KISS heads have been flipping out and calling me every kind of son of a bitch and a lot worse, and until I saw it online I didn't even remember doing it. Strangely, once it all came back to me, I remembered it was from an interview I'd done for a Missoula weekly. At the end of the interview, the interviewer asked me what I thought of Gene and Paul continuing on without Ace and Peter and I told him I saw no reason they should call it quits because the two boozeheads fucked themselves up, and besides, who cares? I mean, it's KISS. Even Gene doesn't take it tremendously seriously, and that was it. Then the article comes out saying I 'weighed in on the controversy,' which I suppose is true, but I never would have thought twice about any of it had the interviewer not ASKED me what I thought.

"Honestly, I don't give a rat's ass about what goes on in the KISS camp. Why would I? I really couldn't care less.

"It took me awhile to even figure out exactly what I'd said that pissed off all the KISS trolls, and as far as I can tell, they're mad because I called Ace and Peter alcoholic junkies, like that's not common knowledge.

"Are KISS fans really stupid enough to believe those two never got loaded? As it turns out, these KISS fanatics seem to have an enormous power of rationalization, but people all throughout human history have believed in totally absurd bullshit so I guess it's not surprising. I mean, in two seconds of an Internet search, I'd found Gene on YouTube talking all about the two of them getting fucked up all through the KISS golden years, and in fact, he even talks about those guys not even playing on tracks of albums like 'Destroyer' because of their fucked up behavior. In order to get the job done, the sober members of KISS were FORCED to hire studio hacks... In the '70s.

"Haven't any of you asshole KISS know-it-alls looked into this or do you just not believe Gene? Who knows?

"So, for the record, you KISS fan fuckheads who are giving ME shit for saying, as it turns out, the exact same thing as Gene can KISS my ass!

"The most hilarious part is they also, in their posts, go on and on and ON about how I look! Apparently I'm a fat, stupid, Sideshow Bob-looking freak that none of them have ever heard of who has no right to talk shit about Ace and Peter. Ace and Peter, two grown men who made a fortune wearing Kabuki makeup as a result of being even uglier than I am.

"You know why they wore makeup? Because they needed it! Obviously, without makeup those two wouldn't have made shit.

"You know, with that in mind, I have a lot more in common with the Cat and the Spaceman than I thought!"