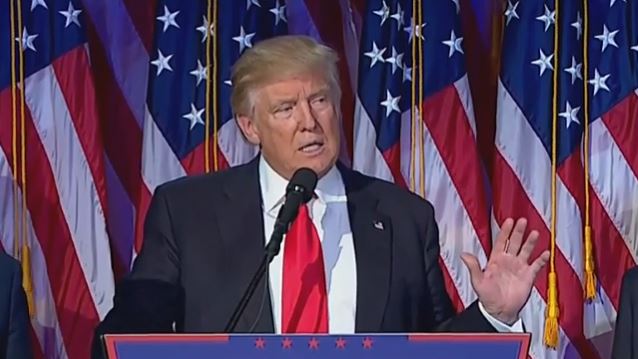 Members of SLIPKNOT, MÖTLEY CRÜE, TRIVIUM, FEAR FACTORY, SUICIDE SILENCE, ALL THAT REMAINS, OTEP, STRYPER, ANTHRAX and LIVING COLOUR are among the rockers who have reacted on social media to Donald Trump winning the presidential election.

SLIPKNOT and STONE SOUR singer Corey Taylor was among the most vocal critics of the president-elect, writing on Twitter: "I didn't think my country could be this fucking stupid or hateful. I'm disgusted. I won't tell you 'I told you so' when he tries to fuck you."

He added in a separate tweet: "Do yourself a favor: find some friends in the black/latino/LGBT+ communities tonight. They're going to need your help- possibly protection."

STRYPER frontman Michael Sweet wrote on Facebook: "Folks, with all due respect, I simply congratulated a man who has worked his ass off for the presidency of the United States of America. If you choose to unfriend me, unfollow me or stop supporting me, don't let the door hit you on the way out. To be honest, it's time to clean house and I'm happy to see the hateful people go. This world needs less of that as well as my Facebook page. If you don't like me being gracious and respectful of our next President, then by all means, see ya. God Bless the USA."

Over the past year, several musicians have joked that they planned on leaving the country if the real estate mogul was voted in as commander-in-chief.

Trump shocked the political establishment Tuesday by becoming the 45th president in one of the biggest upsets in U.S. political history. He collected enough of the 270 state-by-state electoral votes needed to win a four-year term that starts on January 20.

Trump won with 289 electoral votes compared to 218 for Hillary Clinton.

I didn't think my country could be this fucking stupid or hateful.
I'm disgusted.
I won't tell you 'I told you so' when he tries to fuck you

Do yourself a favor: find some friends in the black/latino/LGBT+ communities tonight. They're going to need your help- possibly protection.

Ashamed to be an American

As I know it will be pointed out, I am aware I'm not not not American. But I live here and as such the election affects me greatly. Cont...

Cont... I hope out of this new presidency good things happen. Reguardless; music, soul, art, and beauty will shine as ever! Love y'all.

What the actual fuck is happening? ?

Congratulations to our new commander and chief? pic.twitter.com/OcUhZ5ZNoN

I congratulated @realDonaldTrump because I respect what he has done. It's all about respect & supporting our new President. God Bless The US

Shocked and Concerned for our future https://t.co/7bO3Oeuwws

American people voted for a anti symmetric president society is just reacting to the outcome. https://t.co/7jI9kulqdG

They gave him way to much air time https://t.co/HDkatbS2aa

Rudy Giuliani as AG will send Civil Rights back to the Dark Ages. To think of environmental protection is to WEEP.

A new epoch in American history has begun, for better or worse. Hope cooler heads prevail over the next few months on all sides.

I wonder how the big govt. spending populism of Trump will square with the small govt. conservatives agenda in congress?

Commence the media suck off fest off the fuhrer

No complaints... Not scared... Great things to come not in a big White House... This is a planet not a country... Rabble rabble rabble

I mean say what ya want .... But we used to tell everyone "You can be President of the United States someday"

Hmmmmmm well how about that

I love America.I hope we can grow from this.

Egads. Does this mean that the White House will be painted gold?

God Bless America the Land of Free and the Home of the Brave??????❤️❤️❤️

Hetfield had it right -

"We're so fucked! Shit out a luck. Hard wired to self-destruct!"

America, I defended you against cynics in the past. I can no longer. You have demonstrated all your ignorance, gullibility and stupidity.

Embarrassed and truly fucking depressed with the decision my country made tonight. Nothing else to say.

Hey guys relax. I'm 17 hours in the future here in Japan and everything is OK.

We are watching the birth of a dictatorship.

I feel like I did when the OJ verdict came down. — feeling disappointed