Hailing from the bowels of Canada, stoner sludge metal three-piece MENDOZZA will release an ear-splitting new album in the U.S. on March 17 on Reversed Records.

Emerging from the shadows they call Vancouver, MENDOZZA arrives fast and hard with the throaty Deuce (guitar/vocals), a tattooed beauty Bina (drums) and the heavy-handed The Judge (bass). They've come to deliver another offering ot the masses, their newest creation, "White Rhino". This is a new brand of metal melded from sounds that create a stoner sludge metal tone influenced by such as the MELVINS and CLUTCH.

"White Rhino" is a perfected bastard strain and brought to life with producer/engineer Rob Shallcross (GWAR, STRAPPING YOUNG LAD, JAW) and mixed by Billy Anderson (MELVINS, HIGH ON FIRE, WEEDEATER) whose resin caked fingers dialed in the album's array of thunder, grit and earthy tones that slam into the earth like a screaming pink belly in the desert sun. Devoted MENDOZZA fans are worldwide with the help of the release of their song "Eternal Battle" on the "Underworld II" soundtrack. 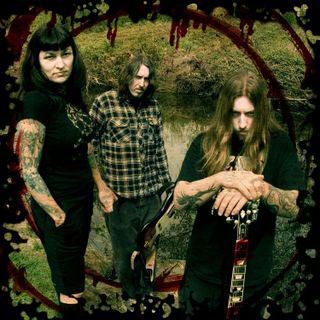