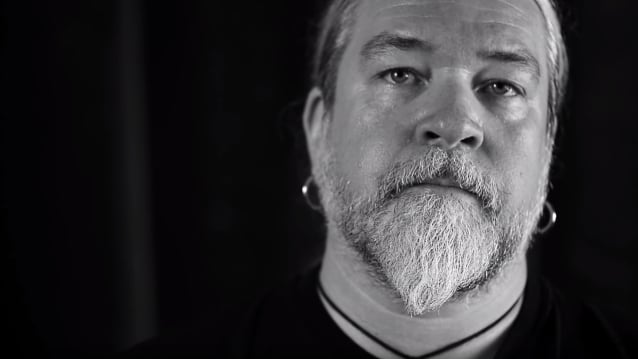 Drumtalk, the video podcast by German drummer and videographer Philipp Koch, recently conducted an interview with MESHUGGAH drummer Tomas Haake. You can watch the entire chat below.

Asked what he loves about watching other drummers play, Haake said: "Some people have certain… Dave Lombardo [SLAYER, SUICIDAL TENDENCIES], for example, he just has that pure energy and musicality. So it's not about whether you can play this or that, it's not flashy — it's just the right kind of drumming; all energy, all heart.

"I don't really care so much for technical drummers," he explained. "There are so many drummers that are great technicians and they would [run circles] around me all day long, so to speak, on a technical level. But at the same time, I don't really think about [that]. I'm not attracted to that — I don't go to look at drummers doing technical stuff. But when you see someone that has 'it' — the thing. Like Dave Lombardo is one of those drummers. Sebastian [Thomson], TRANS AM's drummer, also now out with BARONESS this summer. We met him a few times. He's also one of those drummers. If you listen to a TRANS AM recording, every track has the perfect drums for it — very musical playing. So it doesn't have to be a certain way, and definitely not technical."

According to Tomas, he isn't always fully connected to the music while performing with his bandmates. "Sometimes I feel with myself that I'm not — I'm distanced," he admitted. "On a good night, I think I'm really in it, but on a not-so-good night, I'm more kind of going through the motions and just trying to be as correct as possible as to what I'm supposed to do. Sometimes I'm quite detached — like, my heart is not necessarily there, but you're still kind of going through the motions and you're just trying to kind of make it work and be as precise as possible for the sake of the band and the output of the band. But also, I don't really like to be seen — I like to be kind of in the back. Now our light guy, he has some new lights and stuff, so now you actually see me during the shows, and I hate him for it. I used to just kind of be in there in the black and all the lights were in front of me kind of towards the crowd. You get used to it, though."

Last year, Haake said that fans shouldn't expect to see a new studio album from MESHUGGAH before "2020 at the earliest."

The Swedish group's last disc, "The Violent Sleep Of Reason", came out in 2016 and resulted in a "Best Metal Performance" Grammy nomination for the song "Clockworks".

"The Violent Sleep Of Reason" was produced by the band and was engineered by Tue Madsen of Puk Studios in Kaerby, Denmark.