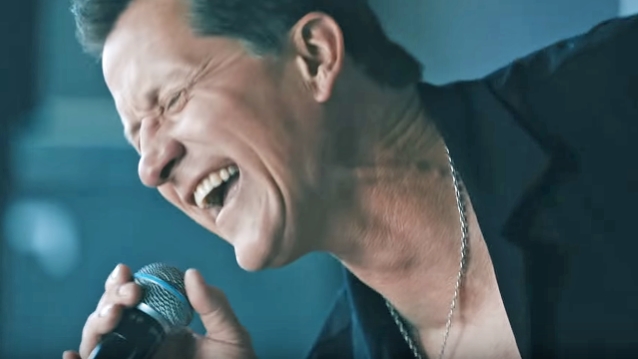 METAL CHURCH singer Mike Howe has told Myglobalmind that meeting Rob Halford and being on the road with the JUDAS PRIEST singer was "a huge highlight" of his career. "I can recall one time leaving the dressing room to go the stage and him telling me that he just got done listening to 'The Human Factor' and how it got him pumped up to go on stage," Howe said. "I was, like, 'Wow!'

"My favorite story that I like to tell about Rob is when I went back to my hometown of Detroit to play an outdoor area, my whole family came out to see the show," he continued. "My mother, knowing Rob was a big influence [on me], asked if she could meet him. I told her, 'After the show, at the meet-and-greet, I'll introduce you to him.' After our set, I came back out to the tent where my family had a big table. I saw Rob and asked if he would take a photo with my mom. He said, 'Let me tell you something, Mike. Your Mom is just like my mom, and she already came over and got her photo with me.' [Laughs] I thanked Rob and went over to the table and saw my mom with her head down looking like a little girl who got her hand caught in the cookie jar. It was so awesome."

METAL CHURCH supported JUDAS PRIEST on the "Operation Rock & Roll" tour in 1991. Also appearing on the bill were ALICE COOPER, MOTÖRHEAD and DANGEROUS TOYS. The trek, which was assembled in honor of the troops fighting in "Operation Desert Storm" in the Middle East, was PRIEST's final tour with Halford before his exit from the band in July 1991 and return 12 years later.

METAL CHURCH's 12th full-length studio album, "Damned If You Do", will be released on December 7 via Rat Pak Records. The effort will also be available in Europe via Nuclear Blast and Japan via King Records. The latest release is the follow-up to 2016's "XI", which saw the return of Howe.