METALLICA has announced a "San Francisco Takeover" to coincide with the band's 40th-anniversary celebrations next month. Among the events being planned are performances by TAIPEI HOUSTON, the new band featuring Myles and Layne Ulrich, sons of METALLICA drummer Lars Ulrich; and OTTTO, the three-piece band featuring Tye Trujillo, son of METALLICA bassist Robert Trujillo; and THE WEDDING BAND, the side project of METALLICA guitarist Kirk Hammett and bassist Robert Trujillo, along with UGLY KID JOE singer Whitfield Crane and BAD WOLVES guitarist Doc Coyle.

METALLICA said in a statement: "We're just one short month away from celebrating 40 years together, and we can't wait to welcome fans from around the world to our hometown! When we first told you about the two shows at Chase Center on December 17 and 19, we also promised a full weekend of 'TALLICA family vibes with curated live music, Blackened Whiskey tastings, and other events starting the night before the first show. Well… we're back with all the details!

"The festivities get started early with our friends WHITE REAPER, who graciously appeared on the recent 'Metallica Blacklist' album, playing at August Hall on Thursday, December 16. Other 'Blacklist' artists GOODNIGHT, TEXAS and Kamasi Washington will also be hitting the stage around town during the weekend at various venues, or you can check out the OTTTO, TAIPEI HOUSTON, and BASTARDANE show… a few of the musicians on stage may look somewhat familiar!

"Of course, the Blackened Whiskey team will be everywhere with welcome and pre-show parties, specialty cocktails, and drink specials. There's a film-fest rolling some of our concert movies on the big screen and an opportunity to see some of the finest METALLICA tribute bands. Photographer extraordinaire Ross Halfin will be busy all weekend signing books, doing a Q&A with our own Steffan Chirazi, and hosting a gallery show.

"Tickets go on sale this Friday, November 19 at 10 AM PST. Already set to attend the two METALLICA shows and want to make sure you get in the door at every other official, ticketed, METALLICA event in San Francisco that weekend? A very limited number of 'Takeover the 40th' upgrades will also be available on Friday.

"Upgrade includes entry for one person to each of the events below that require a ticket (must be 21+ years of age to attend) along with:

"Full schedule [is available here] and additional city-wide activities will be announced soon. Please note that San Francisco proof of vaccination and mask requirements apply to all events. For more information, visit SF.gov."

This past July, METALLICA announced details of its massive 40th-birthday celebration: The band will mark this milestone by inviting the worldwide METALLICA family to join them in their hometown of San Francisco for two unique live shows featuring two different setlists December 17 and 19 at Chase Center. Tickets for these shows were made available only to registered members of METALLICA's Fifth Member fan club.

The 40th-anniversary shows see METALLICA return to Chase Center for the first time since the September 2019 "S&M²" concerts that also served as the venue's grand opening. It was impossible not to notice that fans from more than 60 countries traveled to the City by the Bay and completely took over San Francisco for "S&M²" weekend. That outpouring of positive vibes from around the world inspired METALLICA to invite those Fifth Members back — and this time, in addition to the two shows at Chase Center, METALLICA will be curating other live music and comedy events, Blackened Whiskey tastings, and so much more all around the city during the long four-day weekend of celebrations starting on Thursday, December 16.

Formed in 1981 by drummer Lars Ulrich and guitarist/vocalist James Hetfield, METALLICA has become one of the most influential and successful rock bands in history, having sold nearly 120 million albums worldwide and generating more than 2.5 billion streams while playing to millions of fans on literally all seven continents. The band's several multi-platinum albums include "Kill 'Em All", "Ride The Lightning", "Master Of Puppets", "… And Justice For All", "Metallica" (commonly referred to as The Black Album), "Load", "Reload", "St. Anger", "Death Magnetic" and "Hardwired... To Self-Destruct", released in November 2016 and charting at No. 1 in 32 countries.

METALLICA's awards and accolades include nine Grammy Awards, two American Music Awards, multiple MTV Video Music Awards, and its 2009 induction into the Rock And Roll Hall Of Fame. In June of 2018, the band was awarded one of the most prestigious musical honors in the world: Sweden's Polar Music Prize. METALLICA's newest release, the "S&M²" album and film, arrived last August on the band's own Blackened Recordings label. "S&M²" chronicles METALLICA and San Francisco Symphony's September 6 and September 8, 2019 "S&M²" concerts that served as the grand opening of San Francisco's Chase Center and reunited the band and Symphony for the first time in 20 years. "S&M²" brings those historic shows back to life, capturing more than two and a half hours of James, Lars, Kirk Hammett and Robert Trujillo joining forces with the nearly 80-strong San Francisco Symphony, legendary music director of the orchestra Michael Tilson Thomas and conductor Edwin Outwater. 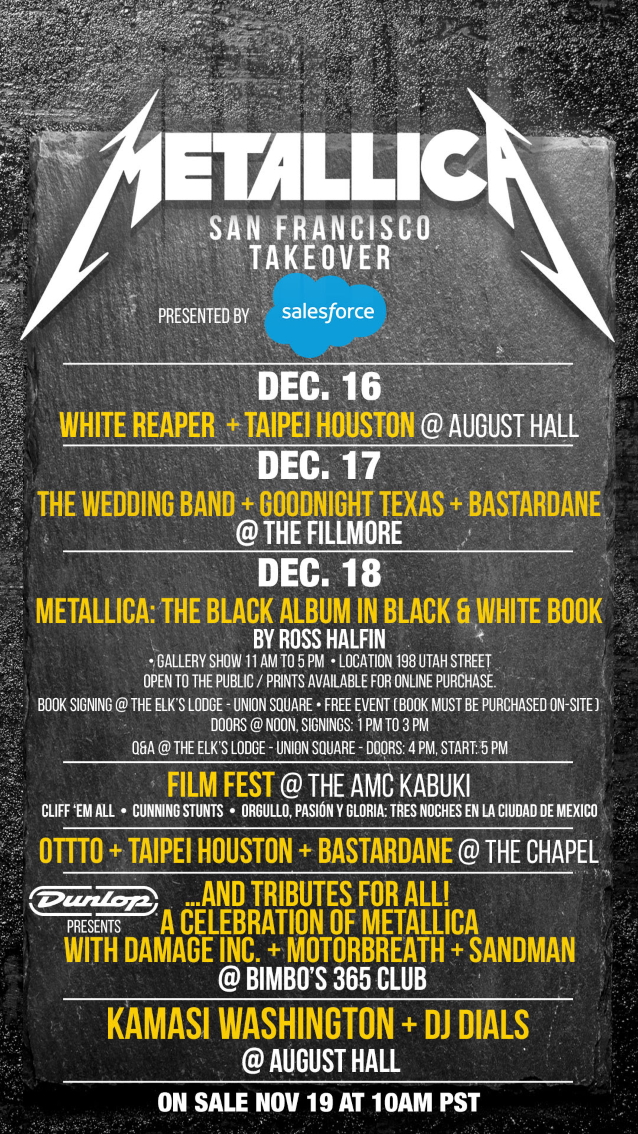