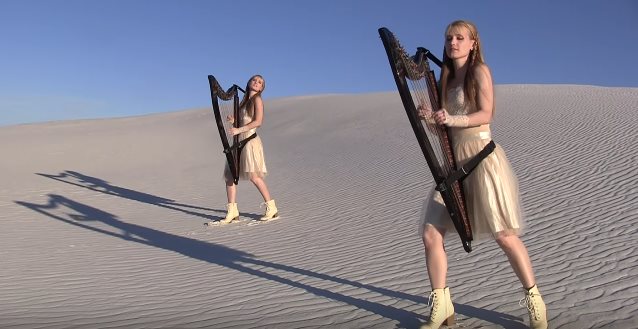 Identical twins Camille and Kennerly Kitt have released a video for their cover version of the METALLICA classic "Enter Sandman". The song features Kevin Bartlett on drums.

Known as the "harp twins," Camille and Kennerly perform internationally as a dynamic acoustic and electric rock harp duo.

As the world's only known identical twin professional harpists, Camille and Kennerly have a passion and flair for arranging and performing contemporary music for harp duet.

Camille and Kennerly are known for their remarkable duet harp arrangements of songs by artists such as GUNS N' ROSES, LED ZEPPELIN, METALLICA, AEROSMITH, AC/DC, DEEP PURPLE and many more. The twins also arrange and perform a jukebox of Broadway, video game, TV and movie soundtrack hits. In addition to being prolific arrangers, Camille and Kennerly compose and perform their own original pieces for harp duet.

Camille and Kennerly began posting harp duet music videos of their rock, metal and contemporary cover arrangements on YouTube several years ago. The twins have since acquired millions of views on their one-hundred-percent independently produced videos in addition to amassing legions of fans worldwide — including over 500,000 Facebook fans. Camille and Kennerly are known for their personal interaction with their fans — responding to more fan messages and comments than any other artist of their echelon.