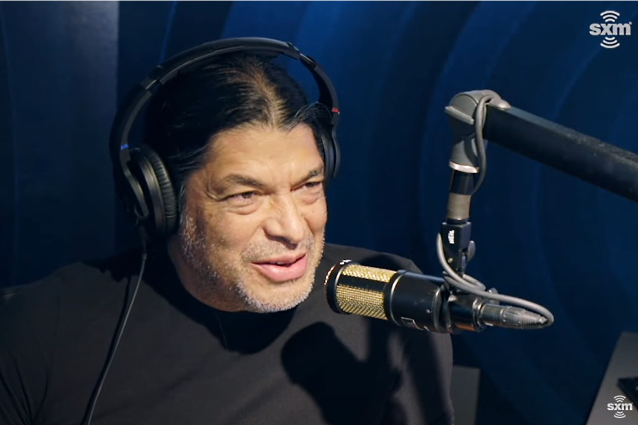 Last month, METALLICA bassist Robert Trujillo played "Worth The Hype" with SiriusXM to rate his career firsts, including his first red carpet, first stadium tour, first time being recognized in public and more. Check out the clip below.

Speaking about his first stadium tour, Trujillo said: "Opening for ANTHRAX in Germany with SUICIDAL TENDENCIES, I could not believe the energy. I had never experienced anything like that to the point where I started laughing, kind of thinking to myself, 'This is a very surreal moment.' Because you grow up playing air guitar, and then all of a sudden you're standing in front of thousands of people and they're loving your music. Like for instance, Munich, Germany — I remember being on that stage and seeing the same stadium that I saw on TV for the Olympics."

Trujillo, who was born on October 23, 1964 in Santa Monica, California, tasted success as the bassist in punk-funk pioneers SUICIDAL TENDENCIES and Ozzy Osbourne's band. But in 2003, he successfully auditioned to replace Jason Newsted in METALLICA, a process chronicled in the warts-and-all documentary "Some Kind of Monster".

METALLICA's much-loved former bassist Cliff Burton died in 1986 when the band's tour bus crashed travelling through Sweden on the "Damage Inc. Tour" in support of "Master Of Puppets".

Trujillo told Exclaim! in a 2016 interview that he feels no pressure when compared to his low-end predecessors. "Whether it's Jason or myself or Cliff, we're all different types of players coming from a different place, but delivering what is best for the band," he said. "That's all I ever do, just try and do the best I can and cater to the song, cater to the music."

METALLICA frontman James Hetfield praised Trujillo during a 2017 interview with the 94.5 The Buzz radio station, saying: "Who else could [have come in and done the job]? I mean, there were a few people we auditioned, I know. It might have worked out with other people, but it's hard to find people that are, say, your age; kind of your upbringing, musically, obviously; ability-wise; they've been on the road. It's not like you're bringing some kid out for his first time, and it's, 'Oh my God!' He's going through all the stuff that you did twenty-five years ago. He's got kids. He's married. It just jelled, and it's still jelling. And his personality is probably one of the best contributions, I think, to the band, 'cause he's so chill, he's so up for anything, he's always in there rehearsing. So he does fit in."