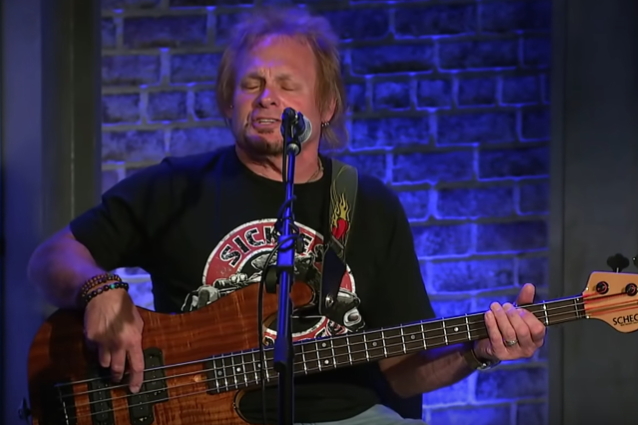 Former VAN HALEN bassist Michael Anthony was asked by Chad Tyson of the Portland rock radio station 105.9 The Brew to name his favorite memory of the band's legendary guitarist Eddie Van Halen. Michael responded (hear audio below): "Just that he was a very humble guy. He never let the fame or stardom or all the accolades that he acquired playing guitar go to his head. He always just considered himself a guy who played guitar, and that was really special about him."

Asked if he has talked to Eddie's son, VAN HALEN bassist Wolfgang Van Halen, in the months following the guitarist's death, Michael said: "I've texted with him a couple of times. I haven't actually talked with him. I wanted to kind of let the family have their privacy. I briefly spoke with Alex [Van Halen, VAN HALEN drummer] after Ed passed. But everything is good. It's really cool what Wolfgang did to his [solo] song 'Distance'. And I wish him the best of luck with the [MAMMOTH WVH] album. It's a hard time right now for somebody to come out with a new album, a new band, or whatever, but I know he'll do well with it when he can get it all out there."

In November, Wolfgang revealed that Eddie Van Halen had contemplated a "kitchen-sink tour" that would have included Anthony, as well as vocal turns from both Sammy Hagar and David Lee Roth. There was even talk about bringing back Gary Cherone, who sang with VAN HALEN on one poorly received album, 1998's "Van Halen III".

VAN HALEN and Anthony had not been on good terms for more than a decade, with Anthony not invited to join the reunion with Roth that began in 2007. The subsequent two tours and studio album, "A Different Kind Of Truth", featured Wolfgang on bass.

Anthony took a pay cut and signed away all of his rights to the band name and logo in order to participate in VAN HALEN's 2004 tour, which featured Hagar.

Eddie died on October 6 at St. John's Hospital in Santa Monica, California. The iconic VAN HALEN axeman passed away from complications due to cancer, his son confirmed.