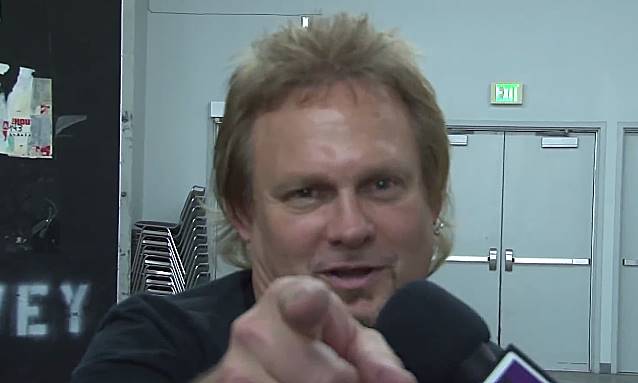 Jeffrey Easton of Metal Exiles recently conducted an interview with former VAN HALEN and current CHICKENFOOT bassist Michael Anthony. A couple of excerpts from the chat follow below.

Metal Exiles: To tap into VAN HALEN for a moment, you guys were always known for the excesses like the drinking, drugs, partying, etc., so what is something about your time in the band that you want the fans to know about?

Michael: Obviously, what the fans saw and what the public saw is, like what you said, the excesses, but the music was always number one. When we were in the studio working stuff out, and even when we were on stage, the music was a priority. You can only go with the excesses to a certain point; it wasn't always the Jack Daniels bottle. We weren't just a bunch of sloppy musicians on stage drinking; we would critique every show.

Metal Exiles: What do you think was one of your highlights with VAN HALEN? Mine was "Fair Warning", as you could not have gotten closer to perfection than that. That was just a dark, mean album.

Michael: "Fair Warning" was my favorite from the David Lee [Roth] era, I just thought it was a great rock album. With Sammy [Hagar], it was "For Unlawful Carnal Knowledge". We got to work with [producer] Andy Johns and he wanted my bass big and beefy, he was fun to work with.

Metal Exiles: Will there be another CHICKENFOOT record?

Michael: There probably will be, but we are still waiting for Chad [Smith, drums] and his daytime gig with the [RED HOT CHILI PEPPERS], as they have been busy. We really do not want to start without him.