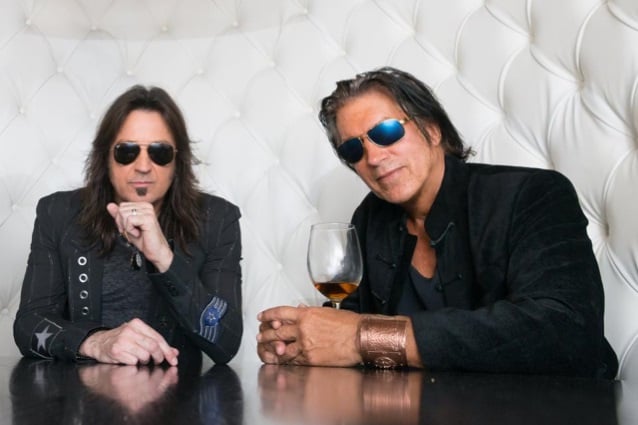 Michael Sweet says that his SWEET & LYNCH collaboration with George Lynch may have "run its course."

Launched earlier this decade, SWEET & LYNCH has yet to play a single live show despite issuing two acclaimed studio albums, 2015's "Only To Rise" and 2017's "Unified", through the Frontiers Music Srl label.

Speaking to the "Focus On Metal" podcast, the STRYPER frontman said that it's likely that there will be no future releases from SWEET & LYNCH.

"I've gotten to the point with SWEET & LYNCH where I'm almost sensing and feeling like maybe it's run its course," he said. "We did two albums. I talked about doing a third and a fourth and a fifth, but there is kind of no point to it if we don't tour. We really should be touring and playing those songs live. It's kind of pointless, after a while, if you're not doing that."

According to Sweet, another reason SWEET & LYNCH hasn't played any gigs is the fact that the LYNCH MOB leader and former DOKKEN guitarist "has his hands in so many different things. When the first album came out and the second album came out, I promoted the snot out of 'em and was really pushing, pushing, pushing, pushing," he said. "George didn't do a lot of promoting and a lot of pushing with those albums. It gets to be exhausting for me when I feel like I'm the only guy really pushing it. And that's not to take anything away from George — it's just a fact. It's a simple fact that I'm stating in saying that that becomes an issue.

"I'm one of those guys where I want everybody in the band pushing and promoting equally as much, as they should be," he continued. "Or why are you doing it? So I'm at that stage right now where I'm just kind of feeling like the fire is kind of dwindling. I don't want it to — I wanna pour some gasoline on the fire and ignite it again. Maybe that'll happen, but it's quite possible that it won't."

Lynch said earlier in the year that the third SWEET & LYNCH would be "a concept record" about Christianity, with George "advocating for one side of the argument" and Michael "advocating for another."