Craft Recordings celebrates the 10th anniversary of MOTIONLESS IN WHITE's acclaimed debut album, "Creatures", with a special reissue — available on vinyl, cassette, and digital formats this Friday, October 9. The vinyl release features newly reimagined artwork, while the deluxe digital release includes three bonus tracks — "Dragula", "Creatures" (Celldweller Beauty Remix), and "Mallevs Maleficarvm" (Tim Skold Remix). Limited to just 1,000 copies, the cassette of "Creatures" can be found via the band's web site or at CraftRecordings.com. The LP, meanwhile, comes pressed on yellow, purple, and black-splattered vinyl and is available exclusively on the band's web site. The band also plans to perform "Creatures" in its entirety during a streaming event on October 28. Tickets for the livestream are on sale now at miwmerch.com.

Declared to be "America's premier industri-metal goth-core outfit" by Alternative Press, MOTIONLESS IN WHITE formed in 2005 when the Scranton, Pennsylvania band members were still in high school. Influenced by MARILYN MANSON, DEPECHE MODE, SLIPKNOT and ROB ZOMBIE, the young group gained a devoted fan base, thanks to their moody blend of driving metal, goth, and industrial music, as well as their striking aesthetic.

Following their 2007 debut EP, "The Whorror", and a successful run on the Warped Tour, MIW caught the ears of Fearless Records. Upon signing, they released a follow-up EP, "When Love Met Destruction" (2009), and entered the studio with producer Andrew Wade (THE WORD ALIVE, A DAY TO REMEMBER, CHUNK! NO, CAPTAIN CHUNK!), to record their first full-length.

The result was 2010's "Creatures", which was inspired by — and dedicated to — the band's ardent fanbase (who call themselves "Creatures"). Ahead of recording, MIW encouraged their fans to send in lyrics — many of which were collectively included in the title track. The album also included the participation of fellow artists, including Nick Brooks of IT DIES TODAY, who contributed vocals to the single "Abigail", as well as Andre Bravo of IN ALCATRAZ 1962, who sang on "Cobwebs". Other highlights included "Immaculate Misconception" (the video included a cameo by TWISTED SISTER's Dee Snider) and single "Puppets (The First Snow)".

Upon its release, "Creatures" debuted at No. 6 on the Billboard Heatseekers chart and peaked in the Hard Rock Albums' Top 20. It also received a warm reception from the critics. AllMusic praised the band's use of synthesizers "to create a dark and uneasy atmosphere. This blend of the frightening and the familiar gives 'Creatures' not only the ability to draw fans in with something they'll immediately click with but which will keep them coming back for another helping." The U.K.'s Rock Sound declared, "It's good to see an of-the-moment band taking things seriously," adding that MIW "push past the boundaries of screamo into more metallic territories, their intermittently screamed and harmonized vocals, epic choruses, and brutal breakdowns keep them firmly in touch with their roots."

Since then, MIW has released four more full-lengths, including their best-selling 2014 LP, "Reincarnate", which debuted at No.9 on the Billboard Top 200, and No.1 on the Rock Albums chart. The band, which currently consists of frontman Chris "Motionless" Cerulli, Ryan Sitkowski (guitar), Ricky "Horror" Olson (rhythm guitar), Vinny Mauro (drums), and bassist Justin Morrow, released their fifth studio album, "Disguise", in 2019, and followed with a rigorous headlining tour. Most recently, they shared a well-received cover of THE KILLERS' "Somebody Told Me" to streaming platforms, while this spring, the band confirmed that they are working on new material.

"After 10 years of our monumental record 'Creatures', we are pleased to celebrate this October with a limited reissue vinyl featuring a completely revamped artwork, our first-ever throwback cassette tape pressing of an album, a digital deluxe edition, and most excitingly…our first-ever performance of a record in entirety in which we will be performing the 'Creatures' album as a stream on the 28th of the month," says Chris Motionless. "After 10 years, we are so grateful that our fans hold this record as close to their hearts as we do and cannot thank them enough for helping us reach our first 10-year anniversary of an album. Here's to 10 more!" 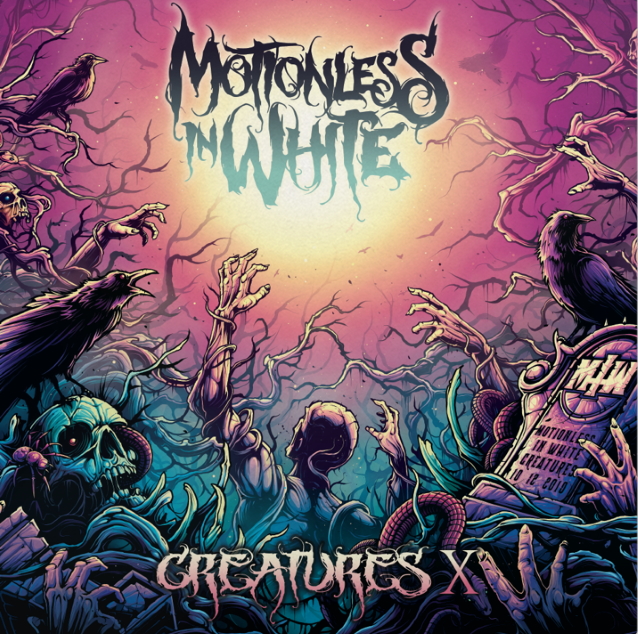