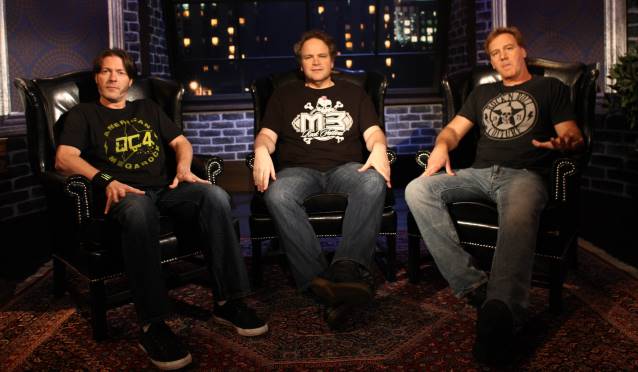 VH1 Classic's centerpiece in original programming "That Metal Show" is returning for its 13th season this week. The acclaimed hard rock/heavy metal talk show, hosted by Eddie Trunk, Don Jamieson and Jim Florentine, kicks off its latest season January 18 at 11:00 p.m. ET/PT. The guests for the debut episode are AVENGED SEVENFOLD vocalist M. Shadows and BLACK LABEL SOCIETY vocalist/guitarist Zakk Wylde. Filling in as the guest musician for the episode is FIVE FINGER DEATH PUNCH guitarist Jason Hook. The episode will also feature the fan favorite segments "Take It Or Leave It," "TMS Top 5," "Rank" and, of course, "Stump The Trunk."

Each week, "That Metal Show" will continue to bring their audience the biggest names in hard rock and heavy metal. A slew of guests have already been confirmed for the upcoming episodes, including Myles Kennedy and Mark Tremonti of ALTER BRIDGE, Randy Blythe and Chris Adler of LAMB OF GOD, Corey Glover and Vernon Reid of LIVING COLOUR and THE WINERY DOGS. Also confirmed to appear during Season 13 are Mick Mars (MÖTLEY CRÜE), Ted Nugent, Ace Frehley (KISS), Peter Criss (KISS), Joe Satriani (CHICKENFOOT), Al Jourgensen (MINISTRY), Morgan Rose (SEVENDUST), Frank Bello (ANTHRAX) and David Ellefson (MEGADETH). Other guests are still being confirmed at this time with more to be named at a later date.

Known for having the best musicians in music perform each week on "That Metal Show", Season 13 will continue the trend with the likes of NIGHT RANGER guitarist Joel Hoekstra, surf guitar maestro Gary Hoey and metal master ANTHRAX drummer Charlie Benante. Other blazing musical performances by CHARRED WALLS OF THE DAMNED drummer Richard Christy and female guitar legend Lita Ford are also confirmed to make the new season the most musically diverse collection of shows in "That Metal Show" history.

This season will mark some monumental changes for the show as it returns to New York City for Season 13. Previously, the show was taped over several days of one week out at Sony Studios in Los Angeles. The new season will be shot at Metropolis Studios on Tuesday nights for broadcast that Saturday. Season 13 will also consist of 12 new episodes making it the longest season in the show's history. Fans can also catch the complete season 12 and brand new exclusive bonus clips at ThatMetalShow.VH1.com and in the new VH1 app. New episodes of season 13 will launch on the web and in the app every Sunday morning following the show's on-air premiere.

"That Metal Show" premiered on VH1 Classic in November 2008 and since then has become the only place for all things hard rock/heavy metal on cable television. The show has been visited by some of the biggest names in music, including members of BLACK SABBATH, AEROSMITH, PANTERA, ANTHRAX, KISS, IRON MAIDEN, METALLICA, PEARL JAM, QUEENSRŸCHE and HEART, to name just a few.

"That Metal Show" is a production of VH1 Classic. Lee Rolontz, Jeff Baumgardner and Keshia Williams serve as executive producers for VH1.