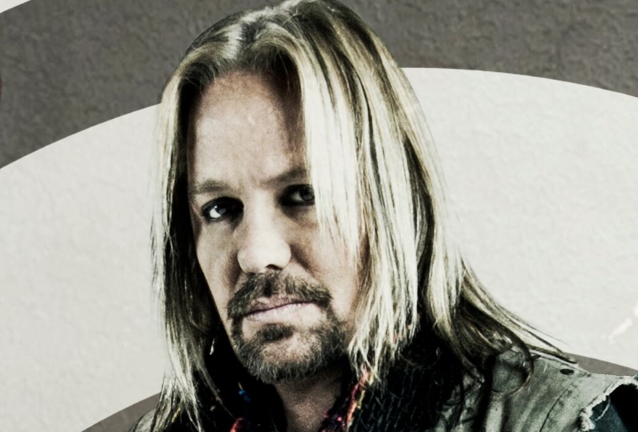 MÖTLEY CRÜE singer Vince Neil is "working out like a madman" in preparation for the opening night of the band's "The Stadium Tour", says his longtime girlfriend, celebrity makeup artist and beauty educator Rain Hannah.

On March 30, Hannah posted a short Instagram Stories video from what appears to be Vince's home gym in Franklin, Tennessee and said that he was putting in a lot of hours getting ready for the shows with DEF LEPPARD, POISON and JOAN JETT & THE BLACKHEARTS.

When one of Rain's followers asked her how Vince is preparing for the tour and whether she will accompany him on the run, she responded: "Wouldn't miss it for nothing! He's working out like a Mad man, designing his wardrobe and gear! Also working closely with the band guys on show prep!

Rain's comments echo those of MÖTLEY CRÜE bassist Nikki Sixx, who recently said that Vince was "killing it" while working with "trainers" and "nutritionists" in preparation for "The Stadium Tour".

Last December, MÖTLEY CRÜE manager Allen Kovac told Fox Business that "some of" the bandmembers had enlisted outside help to get in shape for the trek. Kovac was referring to criticism of Neil for his supposed diminished singing ability and weight gain, as well as the health status of guitarist Mick Mars, who has been dealing with a chronic form of arthritis that led him to undergo a hip replacement.

Kovac explained: "Some of them are working with a trainer, some of them are working with a nutritionist to make themselves the best they can be. The greatest insecurity for an artist is: Is anyone going to care about my music? Is anyone going to buy a ticket? We were in November when the discussions were happening, and these guys were already into regimens of how they get ready for a tour."

At the moment, "The Stadium Tour" is still scheduled to kick off on June 18 in Jacksonville, Florida, although it is likely that at least some of the shows will be postponed because of the coronavirus pandemic. The trek will mark CRÜE's first live dates since wrapping its 2014/2015 farewell tour. The band toured with POISON back in 2011 and DEF LEPPARD teamed up with POISON for a string of road dates in 2017 — but the upcoming jaunt marks the first time all four acts have hit the road together for an extended tour.