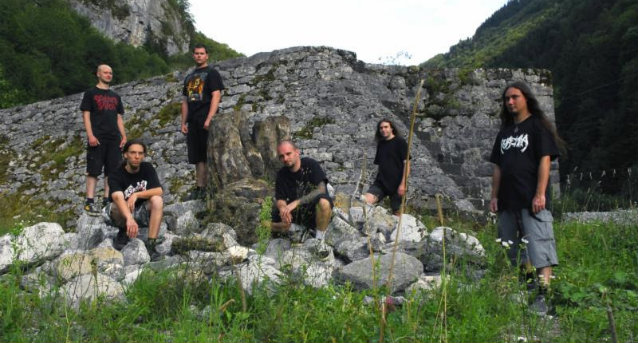 Says the band: "In 2006, just after [former drummer] Floris [De Jonge, Mangled] left ARSEBREED, we got in contact with an unknown young French guy. He said he knew us from our other bands, PYAEMIA and DISAVOWED. We all agreed on a try-out. After only one month, he e-mailed saying he had learned our songs. Slightly skeptical — one month is really quick — we bought him his plane ticket and flew him in. Once in the rehearsal room, he nailed it! Flawless, relentless, speed and accuracy! We instantly knew that this unknown young guy from France, Romain Goulon, was the prefect drummer for ARSEBREED.

"Unfortunately, the best-kept secret in death metal was soon discovered by the rest of the world and in 2007 Romain fled ARSEBREED to join NECROPHAGIST. Nevertheless, last year we once again got in contact with Romain. We started talking about these ten songs that we had written over time, just waiting for a drummer... and we were stoked to hear that he was willing to record them! This week we received the recordings.

"More than seven years later, we got that exact same feeling that we had back in 2006 in that rehearsal room. Insane.

"Romain proved once again that was and is the one and only drummer for ARSEBREED. He is unsurpassed in creativity, technique, speed, perseverance and grasping the concept of the ARSEBREED songs as no one else.

"Finally! We waited for more than six years but it was worth the wait!"

Formerly known as BLOODCUM, ARSEBREED was spawned in 2000 and is dedicated to the execution of brutal, uncompromising, U.S.-styled death metal in the vein of DEEDS OF FLESH and DEICIDE.