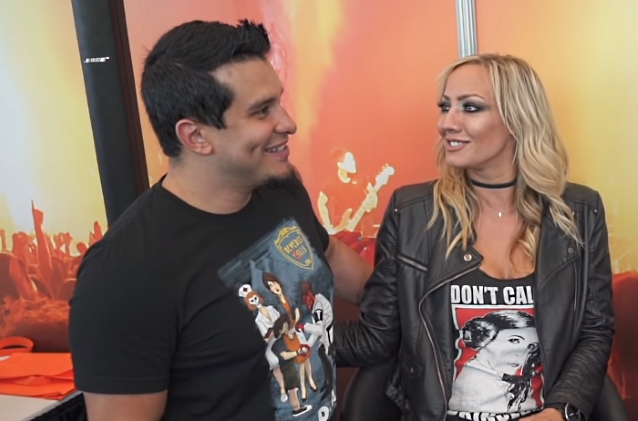 Nita Strauss, the Los Angeles-based guitar shredder for the ALICE COOPER band, was interviewed by Thomann at last weekend's NAMM show in Anaheim, California. You can now watch the chat below.

Asked what it has been like touring with her longtime boyfriend Josh Villalta, who also plays drums in her solo band and manages her career, Nita said: "It's nice. I'm on the road usually eight or nine months out of the year. And being on the road is great — I love traveling; I love playing guitar — but you always have that one missing piece. You get off stage and you're by yourself. So it's great touring together, because we can actually share that moment — the triumph of the show, or the agony of the show, whichever one it is. We can actually be there together and not have to explain it over FaceTime or a text or anything. So it's been great."

Strauss has been playing with Cooper since 2014 when she replaced Australian musician and former Michael Jackson player Orianthi. She joined Alice in time for a mammoth MÖTLEY CRÜE tour. She was recommended to Cooper by the legendary rocker's former bass player and WINGER frontman Kip Winger.