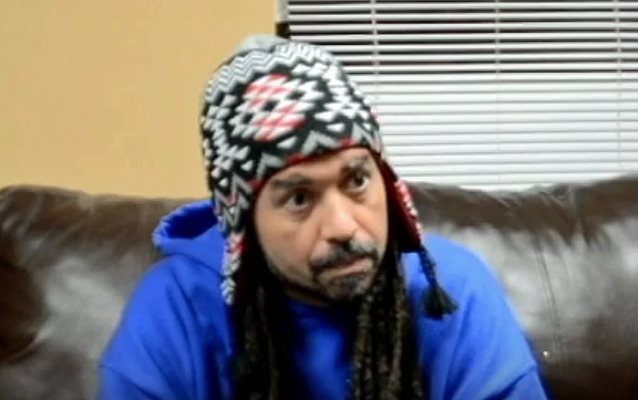 Sofa King Cool recently conducted an interview with NONPOINT frontman Elias Soriano. You can now watch the chat below. A couple of excerpts follow (transcribed by BLABBERMOUTH.NET):

On a possible new trend in concert technology where artists are performing as full, life-sized holograms:

Elias: "It's kind of like what casinos are doing with live bands. Now they're just putting up six- and eight-foot-tall screens and putting digital… an actual video of a band that they just videotaped of fifty cover songs and then just have them playing on a screen so they don't have to pay the band. Eventually, that's what you're moving towards. I mean, if that's how my fans wanna see me, if they'd rather see me hologrammed, hey, that means I can stay home with my family, so no cost for bus, no cost for any of that stuff; I'll just send a truck and a bunch of shit. But, you know, I doubt very seriously that's gonna take over."

On whether he would ever pay to go see an artist perform as a hologram:

Elias: "No. Of course not. I have enough problems with acts that have entire verses and choruses on tracks. If I wanted to pay to hear you sing over your CD, I would have paid. So that's my main thing — have a little fucking pride and a little self-worth in what you do for a living, and get up there and do it for real. And if you can't, pack the fuck up and go the fuck home."

On whether he has ever been in a situation where he knew one of the other bands was using a lot of pre-recorded backing tracks at its live concerts:

Elias: "I've heard of labels coming out to see acts and telling them that if they don't lose the tracks that they're gonna get dropped. I mean, I'm not the only one that feels this passionately about the opportunity being given. I work hard at what I do, and I put it all out there, and I make sure that I'm not a fucking asshole the night before drinking myself into a hole so I don't have a voice the next day. And if that's what you have to do to make sure that you have a good show the next day, lose the fucking tracks and don't get so shithammered. Go to bed at a normal fucking time. Have a little pride in what you're doing, and you'll put on a good show. But if you need all this extra shit to put on a good show, then you're not putting on a good show."

"I've heard tracks go down, and hearing the audience… Just watching new, upcoming bands and new fans of the genre watching a band thinking that they're perfect and hearing this perfection that isn't who or what they are. And watching those same people come off stage and then go straight into the dressing room and do four lines of fucking blow and drink a bottle of fucking Jack and stay up 'till ten o'clock the next morning. If that's what you wanna do, man, that's what you wanna do, but I'm not gonna pretend like that's what I'm gonna do or I'm cool with that, 'cause, honestly, I'm not. A couple of extra guitar tracks, maybe some backup vocals because your boys aren't the greatest singers and you laid down all the harmonies on the record and you're a band like DISTURBED who has the crew and the fucking venue to do it, [it's] a totally different story. I get it. They have a lot more production, they do a lot more on their records that people expect when they go to the show. But when it comes to singing, that motherfucker [David Draiman] sings — he sings his shit. And when it's tough, he sounds like it's a little tough, like he's done a couple of shows in a row. And that I respect — when you're taking your show to another level and you have the means to do it. But when you're a brand new fucking band playing in front of two hundred goddamn people, and you, your guitar players, bass player and drummer and singer can't get up there and just do it on your own, that's not a good thing. You should be able to perform and do it. Like the ALTER BRIDGE guys — they do it for real. And a couple of things that they may do — I don't even know if they do have tracks — but I can tell that Myles [Kennedy] is up there singing, I can tell that [Mark] Tremonti is playing. It's a big difference. That's what you should be doing, because that's what rock bands are all about. If not, be a fucking hip-hop act. Put your CD up and sing over top of it. If not, practice. Get together with your boys. Gain a bit of chemistry. Set your bar high. That will survive you. Because people are gonna start catching on eventually."