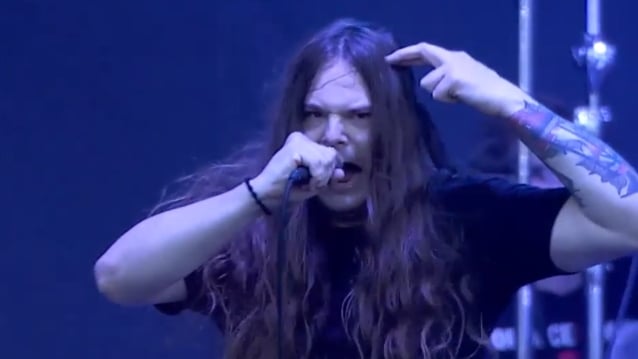 In a new interview with RadioactiveMike Z, host of the 96.7 KCAL-FM radio program "Wired In The Empire", OF MICE & MEN singer/bassist Aaron Pauley discussed his love of METALLICA. Speaking about his first introduction to the heavy metal giants, Aaron said: "I was a young kid. My neighbor used to listen to METALLICA, and that's how I first discovered them. He had a big old METALLICA wall flag, and I was, like, 'That's cool. I wanna know what that is.' That was in the '90s — that was in the early '90s."

According to Pauley, OF MICE & MEN shared the stage with METALLICA at the Rock In Rio festival in Brazil in 2015 and at the Soundwave festival in Australia in 2013. "One of the first years that I did Soundwave with the band, we actually played with METALLICA," he said. "And they threw a barbecue for everybody on the first night, and they were just out hanging around. [It was] very cool. [They're] very cool guys."

Asked to name his favorite METALLICA song, Pauley said: "Oh, man. I'm gonna have to say 'Master Of Puppets'. I mean, you can't go wrong with it, right? If somebody was, like, 'Where should I start? What's the first song I should listen to?', that might be one of the first songs I'd show 'em."

OF MICE & MEN's new EP, "Timeless", will be released on February 26 via the band's new label home, SharpTone Records.