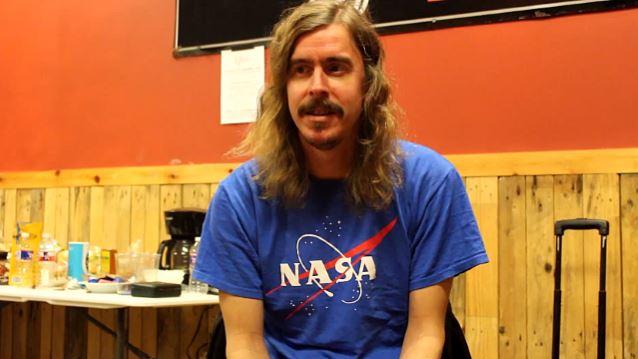 On December 13, KNAC.COM conducted an interview with guitarist/vocalist Mikael Åkerfeldt of Swedish progressive metallers OPETH in Dallas, Texas. You can now watch the chat below. A couple of excerpts follow (transcribed by BLABBERMOUTH.NET).

On whether he is excited about OPETH's 25th-anniversary celebrations in 2015:

Mikael: "Yeah, but I don't think about those kinds of things too much. It's weird, more than anything, that we've been around 25 years. When you see that number, it's, like, 'Fuck! We've been around that amount of time.' It's a bit… It doesn't feel that long. But me, I'm not the type of guy that's, like, 'Hey, let's go out and celebrate.' It's more of a way into… Like an idea for a tour. That's what we're doing. Right now we only have one show announced celebrating 25 years. And it's also the ten-year anniversary for 'Ghost Reveries'. And we might do a few of those [shows], but we don't really know where or when. But that's the plan.

"If nobody told us that we're celebrating 25 years, I would have forgotten about it. But the management are, like, of course, on those kinds of things."

On whether he thinks OPETH will still be around in another 25 years:

Mikael: "Well, I won't… Maybe we're still around. You never know. But, for us, it's not… If we can do it, if we can still play… Say, we're 60 years old, we're still in good shape that we can play, and we sound good, and we think it's fun, and we're creating and writing stuff that we like… Basically, if we are the same that we are now, but we are 60, why not? I haven't really thought about retirement yet."

OPETH will celebrate its landmark 25th anniversary as a band next year with a very special event at the legendary London Palladium on October 18, 2015. After being the heaviest band to play the Royal Albert Hall in 2010, they will no doubt be the heaviest band to also play the Palladium. The unique show, dubbed "An Evening With OPETH", will feature two sets from the progressive Swedes, including 2005's much-lauded "Ghost Reveries" album in its entirety (which in turn is celebrating its 10th anniversary), plus a second set of classics from their 25-year career.

OPETH's eleventh studio album, "Pale Communion", sold around 13,000 copies in the United States in its first week of release to debut at position No. 19 on The Billboard 200 chart.

"Pale Communion" was released on August 26 via Roadrunner Records. The cover artwork was once again created by Travis Smith — with art direction by Mikael Åkerfeldt. The CD was produced by Åkerfeldt and mixed by longtime collaborator and PORCUPINE TREE frontman/guitarist Steven Wilson.