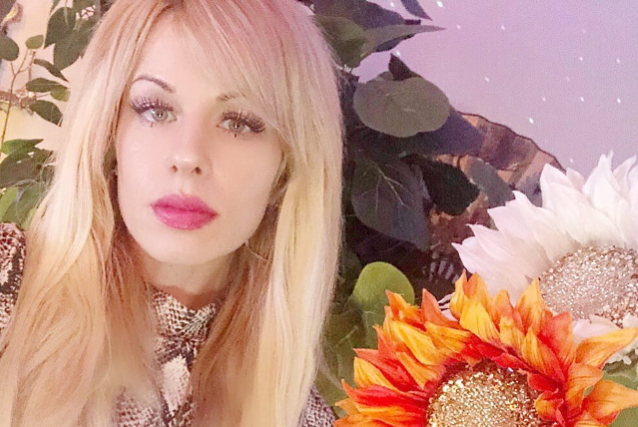 "I'm so excited about this record — really excited," she said (hear audio below). "We did it in 28 days in Nashville. [I made the record with] Marti Frederiksen, who's a dear friend of mine, an amazing songwriter, producer. I just go out to Nashville, where my management is at, and I love it over there. I made actually my last record too, with Dave Stewart there, at Blackbird [studio]. There's some kind of energy in Nashville — it's just a great feeling when you get there. So many musicians are there. And we just jumped right into the studio. Marti and I wrote and recorded, in 28 days, all the songs. And, yeah, it was just a great, fun experience."

Regarding the musical direction of her new material, Orianthi said: "This record is not too much of a departure from my past stuff, but it is different. So I think people will get what they sort of expect, with that heavy riffage and big solos, but there's a lot of different sounds going on and textures, with drum loops and synths. It's not just staying with one tone throughout the whole record… There's some heavy tracks on there. There's some lighter tracks [and] bluesy tracks. As I said, it's different, but it's kind of what people were sort of expecting.

"The thing is you have to keep on evolving and changing," she explained. "You don't make the same record over and over again; I would just bore the hell out of myself and everyone else. So I wanna keep on changing. And I'm already thinking about the next record right now. Marti+- and I are writing next week for it."

Asked if all the songs for the follow-up to 2013's "Heaven In This Hell" were written specifically for this project or there were some which she had previously written that were later "finessed for inclusion," she said: "A couple were finessed, but pretty much the majority of them were just all written for this record. A song called 'Sinners Hymn', which I had for a minute, I brought that in, and we added the chorus to it, 'cause it had a different chorus, and made it sound a little heavier. And I think that's kind of it. 'Cause the rest of it was just written all for this record. And one was written with Nikki Sixx from MÖTLEY CRÜE, which was amazing. [He wrote] killer lyrics. He e-mailed them to me, and I was, like, 'Woah! These are amazing.' So, yeah, we wrote a song with those lyrics — Marti and I. I'm really excited for everybody to hear this record. And hopefully they dig it as much as we enjoyed making it."

According to Orianthi, she has yet to pick the first single from her upcoming album. "There's a couple that I'm thinking of right now," she said. "I don't know. I've talked to the label about it, 'cause there's gonna be an announcement soon from the label. And then we're gonna decide upon which one or two songs we put out. I kind of wanna put out two songs, 'cause it's been a while since I've put out music. But we'll see what makes sense and what's right. It's a team discussion with everybody."

Orianthi's new LP does not yet have an official release date, but it will likely arrive before the end of the year.

Over a year ago, Orianthi recorded a song called "Love Bomb" with producer Paul Dawson, who had previously worked with Rihanna, Ariana Grande, P Diddy, Justin Bieber, Jay Z and many more.

Born in Australia, Orianthi was inspired to learn guitar at a young age after discovering her father's vinyl collection. She rose to international fame at age 24 after the release of her hit single "According To You" and a high-energy performance backing Carrie Underwood at the 2009 Grammy Awards. Although she had already been invited to jam with the likes of Carlos Santana and Steve Vai, mainstream audiences had not previously heard of this captivating guitar prodigy.

Her recognition increased even further when Michael Jackson called with an offer to be his guitarist for his dates at the O2 Arena in London. Although the concert series was not to be, the release of the behind-the-scenes documentary "Michael Jackson's This Is It" showcased Orianthi's masterful playing as well as her creativity and collaboration.