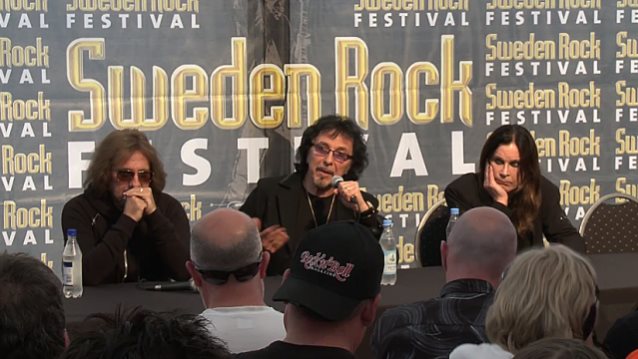 BLACK SABBATH members Ozzy Osbourne (vocals), Tony Iommi (guitar) and Geezer Butler (bass) took part in a press conference yesterday (Friday, June 6) before their performance at this year's edition of the Sweden Rock Festival in Sölvesborg, Sweden. You can now watch video footage of the question-and-answer session below.

Asked about the band's recent concert in Moscow when technical issues prevented BLACK SABBATH from playing "Paranoid" as an encore, Geezer said: "It's probably one of the very few times that we haven't [that song during a SABBATH concert]. But it wasn't our fault, because it was the hard disk in the P.A. system went down. And you can't just replace it. You have to reboot the whole system, and it takes 24 hours, I think." Tony added: "We were all ready to go on, and then suddenly it went off."

Regarding BLACK SABBATH's plans for the future beyond the band's current tour, Ozzy said: "We haven't really discussed it. It is possible there's gonna be another album. But we haven't really sat down and decided what we're gonna do yet. We just wanna finish this tour and then we'll see."

Asked about Tony Iommi's recent remark that their upcoming concert in London's Hyde Park could be their last, Ozzy told Guitar World, "If it's goodbye, we're ending it on a high note… But I'm up for another BLACK SABBATH album and tour. If we can, great. If not, I'll just carry on doing my own thing."

Ozzy added, "I never say never. I never thought after 35 years I'd [be back with BLACK SABBATH], have a No. 1 record and a sold-out tour."

Iommi, who has battled cancer since 2012, said recently that the massive July 4 gig at London's Hyde Park could be the band's last because the touring can be tough on him.

Iommi, who is in remission, admitted, "To be honest I don't want to be touring to this extent too much longer, because it makes me feel so bad."

The Hyde Park show will feature SOUNDGARDEN and others in addition to the headliners.