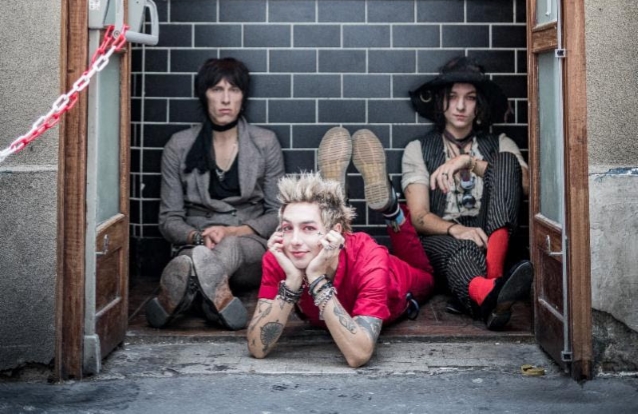 Continuing the fan frenzy they created last week when they released their mysterious video for brand new track "F***ing With My Head", Canadian rockers PALAYE ROYALE have released the clip for another brand new track, "Nervous Breakdown". Watch the video below.

The release of these two new tracks and their accompanying visuals heralds the transition into the next era of PALAYE ROYALE.

Both videos follow a story from the band's upcoming "Neutopian" graphic novel written and illustrated by the band's drummer, Emerson Barrett. They contain several hidden symbols and references to clues that the band have been including in videos and artwork since PALAYE ROYALE began. The band's rabidly obsessive fandom — The Soldiers Of The Royal Council mobilized en masse last week when the new video dropped providing their own theories on what it all means and who/what the mysterious Lieseil Inc is.

"Nervous Breakdown" takes fans even deeper down the rabbit hole of the utopian world being created by the band.

Speaking on the dawning of the new era, the band says: "'Nervous Breakdown' is the continuation of the story we started with the video for 'F***ing With My Head'. As the new era is beginning to be revealed, the viewer is cryptically introduced to Lieseil Inc and Warhol Stars.

"For the past seven years of our career, we have been hinting at this in lyrics, music videos and artwork. Like an existential maze for the fans to figure out and link together. Recently we have been posting in binary and Morse code leading the fans further into the secrets of the conceptual story. Every new piece of material released is a further insight into the world that we have created."

PALAYE ROYALE has just returned to the U.S. from two weeks in Europe where they hit the major festival circuit with performances at legendary festivals such as Download, Isle Of Wight, Austria's Nova Rock and Pinkpop in the Netherlands. They also played a special, intimate charity show the infamous Borderline in London in aid of Nordoff Robbins, the largest independent music therapy charity in the U.K., dedicated to changing the lives of vulnerable and isolated people through the power of music. All proceeds from the show went to the charity.

The band's latest album, "Boom Boom Room Side B", was released in September 2018 via Sumerian Records.