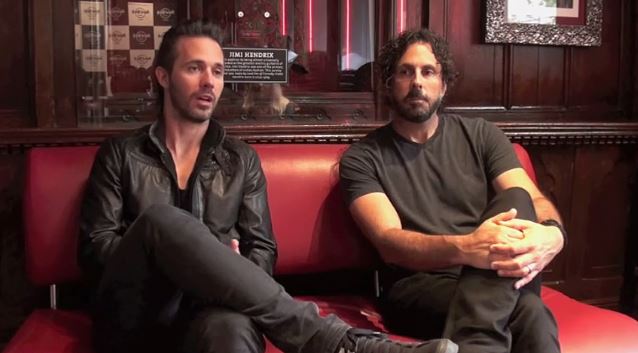 France's RockNLive recently conducted an interview with PAPA ROACH guitarist Jerry Horton and drummer Tony Palermo. You can now watch the chat below. A couple of excerpts from the chat follow (transcribed by BLABBERMOUTH.NET).

On working with father-and-son super-producers Kevin and Kane Churko (FIVE FINGER DEATH PUNCH, IN THIS MOMENT) on their eighth full-length album, "F.E.A.R.", which will be released on January 27, 2015 via Eleven Seven Music):

Jerry: "It was our first time working with them. We chose them because they have great tones, great sounds, very direct. And they've worked with FIVE FINGER DEATH PUNCH, and IN THIS MOMENT they worked with a lot, and we liked what they did with their sound.

"We originally thought about making a heavy record. Then certain songs came to light, and we couldn't refuse those. So we ended up making another diverse record.

"We basically chose them for their sound and their production quality."

On the recording process for "F.E.A.R.":

Jerry: "It was different this time. We didn't have any material going into the record. We had to start new. We had little musical ideas, but no finished songs yet. And the other way that this was different was we couldn't really jam. We couldn't play together very much. Tony and Tobin [Esperance, bass] would play a couple of nights, and they actually got a song out of that. But other than that, we had to do everything either at the house… We had a small, little studio setup at the house we stayed. We worked on music during the day and then brought it to the studio in the evening and played the music for everybody and started recording there."

The members of PAPA ROACH challenged themselves in the making of "F.E.A.R.", and for singer Jacoby Shaddix, the biggest challenge was entering the studio with almost no material ready to go. Shaddix told The Pulse Of Radio about the experience. "Oh, I was incredibly terrified," he said. "I did not want to do it like that. I'm like, 'I can't go there without anything.' And Tobin, our bass player, is, like, 'Dude, we got this! Don't even trip, man. Like, we write music all the time, dude. Let's just go in there and do what we do best.' And the producer's, like, 'Yeah, man, just come down, and if it's working, it's working, man.' He's, like, 'Nine times out of 10, bands come in here and the floodgate opens.' So I just kind of had to walk in faith on this one and go, 'All right.'"

Shaddix said in an interview with Artisan News, "Kane [Churko]… he listens to everything but rock and roll. He's just a fan of hip-hop music, pop music, avant garde music [and] jazz music." Shaddix added, "So he approached it from a very different standpoint than his father did, and that just added a different element to what we were doing."

PAPA ROACH and SEETHER will team up for a co-headlining North American tour that kicks off on January 9 in Orlando, Florida and winds down on February 7 in Las Vegas.