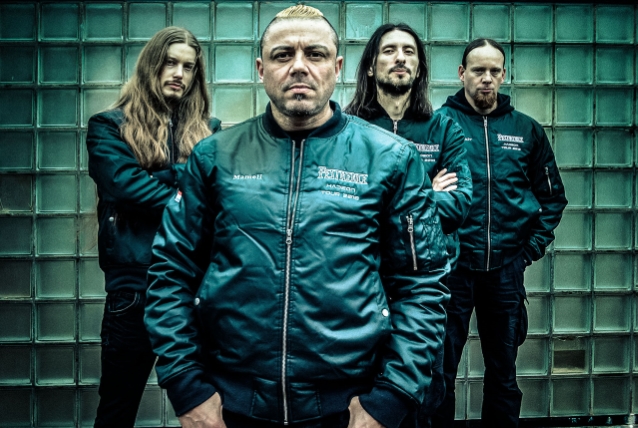 Guitarist/vocalist Patrick Mameli of Dutch death metal veterans PESTILENCE recently spoke to Metal Underground about the importance of maintaining a signature sound while progressing musically with each new album.

"I always try to use elements that I've done before," he said (see video below). "With me not listening to other metal that much, I don't get influenced, so it's always pure PESTILENCE music. So whenever comes by or you hear a certain song, you automatically hear it's PESTILENCE. Every album kind of has a different flavor, different vocals.

"I'm not one of those guys that always comes up with the same ground," he continued. "For me, it gets really boring if it's always the same. But I have a feeling that a lot of the fans do want that — they want that continuum going. Look at CANNIBAL CORPSE. Look at OBITUARY. All these bands haven't changed one bit, yet they're very successful. So that means that it has something to do with keeping the style pure and true. But for me, I like to progress a little bit more. It makes it more interesting also for me, but that's also a risk. 'Cause if you try to do something else, there might be a risk that the fans don't wanna pick it up anymore. So that's difficult."

According to Mameli, PESTILENCE does not attract as much record company interest as some other bands because of his knack for pushing the boundaries with his music.

"Record companies, they're very sensitive to those album sales, since there's no money to be made with album sales anymore," he said. "People in record companies, they're a little bit scared of us, because, 'What's he gonna do next? Is is marketable? Can we do something with it?' And [2018's] 'Hadeon' was such a perfect album for me to continue, and yet it's not in the Top 10 or something, which I don't understand. There are all these other bands out there that… I think they were born with Pro Tools or Cubase where making a song is like putting 30, 40 riffs at hyperspeeds. They lack technique, their lack of understanding of the instrument itself, so they depend on technology to fix that for them. I don't think that some of these guys can play what they actually put on the album. And I think that's a bad side effect of technology."

PESTILENCE's latest album, "Hadeon", was released in March 2018 via Hammerheart.