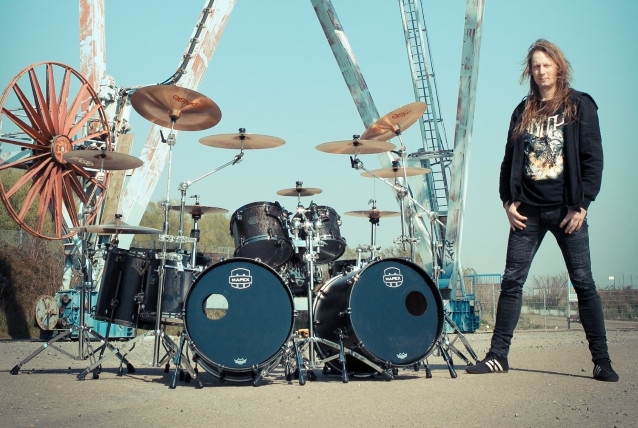 German metallers PRIMAL FEAR have parted ways with drummer Francesco Jovino and have replaced him with Michael Ehré (pictured; GAMMA RAY). Michael will join PRIMAL FEAR on the group's summer festival tour and will record the new PRIMAL FEAR album later this year.

Said PRIMAL FEAR in a statement: "Welcome, Michael, to the Metal Commando and we're proud to have you! Thanks to Francesco Jovino for four years rocking hard with us and traveling the world. Cesco, we wish you and your family only the best and good luck for your next projects."

Added Ehré: "I'm super happy to join PRIMAL FEAR! From the beginning, I followed their career, know the guys in the band for years and was always a big fan of their music! I'm really excited and can't wait to hit the stage at the Rock Fest in Barcelona."

Said singer Ralf Scheepers: "What a drummer! I know Michael since quite a while now and I have always followed his great work for the bands he was drumming. I'm more than excited to share the stages of the world with such a talent and the wonderful person that he is. It's fantastic to have you on board, Michael!"

Last fall, PRIMAL FEAR announced its return to Nuclear Blast Records. The relationship between the band and the label from southern Germany goes back over 20 years, since PRIMAL FEAR released its self-titled debut in February 1998 via Nuclear Blast. They later released classics such as "Jaws Of Death" (1999), "Nuclear Fire" (2001), "Black Sun" (2002), "Devil's Ground" (2004) and "Seven Seals" (2005) before parting ways with Nuclear Blast for a while and releasing another six very successful albums, including "Apocalypse".