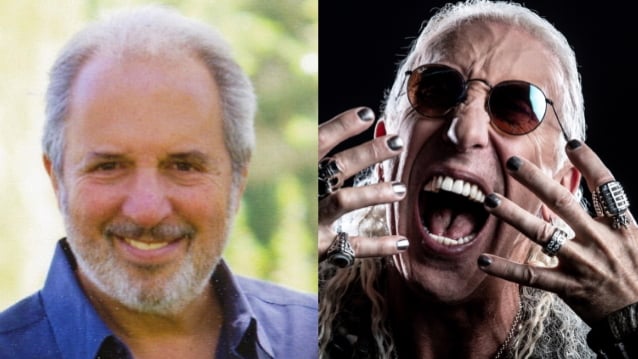 Veteran hard rock producer Tom Werman has once again fired back at Dee Snider over the TWISTED SISTER singer's comments regarding their collaboration on the triple-platinum "Stay Hungry" album.

During a recent appearance on "The Jasta Show", the Internet program hosted by HATEBREED frontman Jamey Jasta, Snider said had "begged" Werman to put the songs "We're Not Gonna Take It" and "I Wanna Rock" on the LP. "[Tom] didn't want those two tracks on the record," Dee said. "I was on my knees in front of him… I wasn't begging on my knees, but because he was sitting and there was noise going on… And he's going, 'Eh, 'We're Not Gonna Take It', it's a little [hums melody mockingly]' I go, 'Trust me. It's gonna be edgier when we do it. That's the thing. It's catchy.' And his answer was, 'All right, if you really want it.' Okay, that was 'We're Not Gonna Take It'. And 'I Wanna Rock', he goes, 'Eh, I've done that thing already with MOLLY HATCHET. [hums galloping rhythm]' He was mocking my song. He actually presented me with SAXON songs to put on the 'Stay Hungry' album from [SAXON's] 'Strong Arm of The Law'. He goes, 'Check this out.' I go, 'Yeah, it's SAXON.' He goes, 'It's really good.' I said, 'Yeah, it's SAXON.' He goes, 'Nobody really knows them.' I said, 'We've toured with them. It's SAXON.' … He wanted us to cover SAXON songs. And I love SAXON, but in my community, it was current. It was their album that came out last. And he had this attitude, like, they were European, they weren't really big."

After Snider's comments were published on BLABBERMOUTH.NET, Werman spoke to Full In Bloom about Dee's criticism, accusing the singer of "embellishing" the facts and denying that he had the power to singlehandedly pick the songs that were going to be include on the album.

Tom said: "It's kind of a mystery [as to why Dee is complaining about it now]. Here it is 36 years since we made that record. There are several things he's ignoring or avoiding [or] omitting. One is that no producer — maybe Quincy Jones — could have that kind of influence, that kind of power.

"When an independent producer is hired by a label or a band, he is not given the authority to decide which songs are recorded," he continued. "It's a cooperative venture, Now, there's probably a very good chance that when they played me the demos of 'We're Not Gonna Take It', I said, 'Well, it sounds a little bit like a nursery rhyme.' Definitely catchy. But I probably needed a little bit of convincing. Getting down on his knees and begging? No. No.

"It's the dramatization and the embroidering and the embellishment of the actual facts — that's really sleazy, and it's very Trumpian. That's the way he operates.

"Dee Snider was there for the mixes. Dee Snider approved every single mix. So, really, if he doesn't like the album, it's just as much his fault as it might be fine. So, he blames somebody else…

"Who else blames somebody else for everything that's happening? Dee seems like a Trump disciple. He does everything that Donald Trump does that's despicable. Well, not everything, but there you go.

"I committed the terrible crime of saying, 'Hey, I like this song. Maybe you could do it,'" Tom said. "[Dee] said, 'Woah, it's SAXON.' 'That's right. That's right. It's SAXON. I really like this.' And I think it was 'Strong Arm Of The Law' or something like that. SAXON was a good band. He said, 'We've toured with them. We know them.' But the way he put it, it was, like, 'What, in God's name, is a producer doing, suggesting to me, Dee Snider, who writes songs, that I should do a song that somebody else wrote?' We do it all the time. I've done cover songs with everybody. MÖTLEY CRÜE did 'Smokin' In The Boys Room'. POISON did 'Your Mama Don't Dance' — a Top 10 single. So I said it, I recommended it. And he goes nuts: 'He wanted me to do a SAXON song, for God's sake.' That's right, Dee. I wanted you to do that. And he said no. Did I force you to do it? No. Because I can't.

"If I had the power to keep one of Dee's songs off the album, then I would have had the power — the same power — to force him to put another song on the album. Obviously, I don't have that power as a producer, and I never did, nor do many other producers. The producer is a hired gun; you fire him if you don't like him. In their case, [Dee] was pissed because he was forced to work with me by Doug Morris, who was a fairly successful record guy, songwriter, number two or three guy in the recorded music history, behind Clive [Davis] and Ahmet [Ertegun]. And he called me up and he said, 'Tom, you are the only producer I can think of who I think can make a hit with this band. And I really want this band to break a million in the United States.' So, of course, I said yes, and, of course, I knew that my job was to make them a commercial success.

"I really don't know what I could have done different to satisfy this guy," he added, referring to Dee. "I mean, the record that he made with the band, the re-record [of 'Stay Hungry'], that he said, 'That's the way we should have sounded,' I don't know who marketed it, but I understood that in the beginning, after it was released, it sold about 25 thousand records. CHEAP TRICK did the same thing.

"Years later, you're not so good. But at the time, you're great. They're selling millions of records — we love you. We love you, Tom. You're the best. And then, 20 years later, nah, he didn't get our sound right. He wasn't focused. He barely gave a damn about us. He tried to keep our best songs off the record. Whatever you like. It's just, like, I think I'll revise history here a little bit."

In a 2004 press release announcing the release of the re-recorded and expanded version of the classic 1984 album — under the new title "Still Hungry" — guitarist Jay Jay French said, "'Still Hungry' is 'Stay Hungry - The Way It Ought to Be'. It has an ultra-heavy sound, which is the way we wanted 'Stay Hungry' in the first place. But at that time rock records had a thin, very midrange kind of sound and so 'Stay Hungry' was recorded very lightly. We battled Atlantic Records and producer Tom Werman about it, but we lost. These re-recordings are faithful to the original arrangements but they sound much heavier."