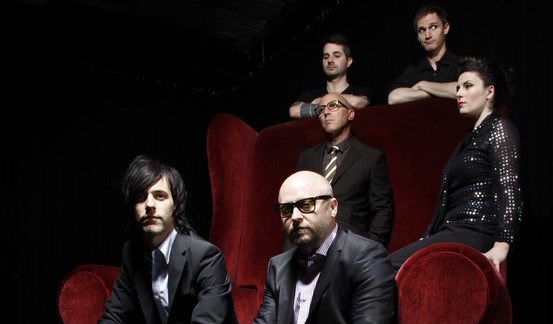 PUSCIFER answers the enduring question of what exactly Puscifer is with a new DVD release titled "What Is…", which is due on November 26 via Puscifer Entertainment.

The two-hour sketch comedy show-meets-concert film builds upon and punctuates the multimedia format of the band's live performances with skits from the stable of PUSCIFER characters such as Billy D, Hildy and Major Douche woven into the performance footage of the Maynard James Keenan-led (TOOL, A PERFECT CIRCLE) quintet.

"Being surrounded by so many talented and creative people is an endless source of inspiration," explains Keenan. "This film only scratches the surface of how deep our proverbial rabbit hole goes. 'What Is… Puscifer' is meant to conjure as many questions as it answers." An accompanying soundtrack will be released simultaneously.

PUSCIFER's concerts have been praised for their out-of-the-box take on what a live performance can be, with the Orange County Register saying "the production… matters as much as the music" and describing the event as “a thought-provoking, senses-jabbing statement on a variety of topics.” The Dallas Morning News called the evening "an idiosyncratic experience" while the Austin Chronicle referred to the concert as a "multimedia prop dramedy."

In stores August 27 is "All Re-Mixed Up", a track-for-track remix album of the band's sophomore release "Conditions Of My Parole". The twelve-song remixers include Sir Mix-A-Lot, PALMS, Five Knives and Alain Johannes.