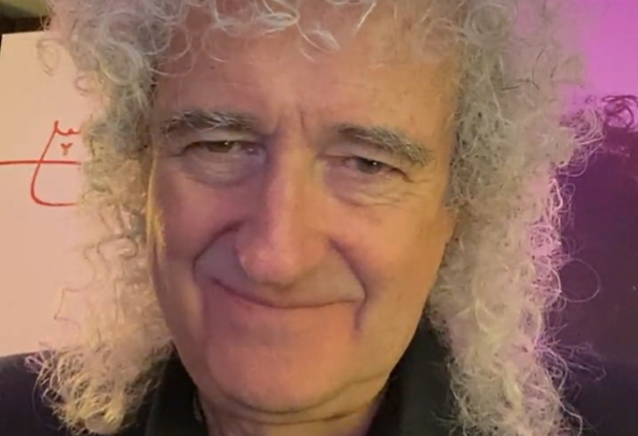 In a new interview with Goldmine magazine, QUEEN guitarist Brian May was asked if he ever thinks about recording another solo album. He responded: "Yeah, I do think about it. And strangely enough, I think it probably would be instrumental this time. Because I have enough ideas. And I have lots of unfinished business. So, yeah, I do think about it. And maybe the opportunity is coming up. We have a big world of touring to do. And we've been postponing and postponing the QUEEN tour, which we started just before COVID happened. Next May, we will be doing a bunch of touring. Once that's done, I think I will have the opportunity to sit down, and if I'm spared, as my mum used to say, and I'm still functional, I think I might make that album. Probably not before. I don't think I can do it right now. I'm too involved in the reissues. Actually, I'm loving this. I'm really enjoying going through and polishing. I have [1998's] 'Another World' to do next. I'm going to do 'Star Fleet [Project]' [1983 EP released under the BRIAN MAY + FRIENDS banner], which is the one with Eddie Van Halen, after that. There's a mountain of stuff that I want to polish up and put out there, so it's there. It's a good, good feeling to have it out there."

May's first solo album, 1992's "Back To The Light", which has long been unavailable on CD, vinyl and streaming, was recently reissued on various formats containing the original tracklist as well as bonus live and studio songs recorded from the period.

On its release, "Back To The Light" was an unqualified hit. Hitting No. 6 in the U.K. album chart, it produced a brace of indelible singles. Introduced to QUEEN fans during an emotive performance at the Freddie Mercury tribute concert at the Wembley Stadium in April 1992, "Too Much Love Will Kill You" reached No. 5 in the U.K. "Driven By You" had already peaked at No. 6. The anthemic "Back To The Light" and rollicking "Resurrection" also charted, while the instrumental "Last Horizon" would become a staple of both the Brian May band's solo concerts and May's later live return to QUEEN.

In 2004, QUEEN recruited BAD COMPANY singer Paul Rodgers, with whom they completed two world tours and released an album, "The Cosmos Rocks", in 2008. They amicably parted ways a year later when Rodgers returned to BAD COMPANY. Since 2011, QUEEN has been fronted by "American Idol" runner-up Adam Lambert.

Lambert, May and drummer Roger Taylor first shared the stage during "American Idol" in May 2009 for a performance of "We Are The Champions". They teamed up again in 2011 at the MTV European Music Awards in Belfast, Ireland for an electrifying eight-minute finale of "The Show Must Go On", "We Will Rock You" and "We Are The Champions" and in the summer of 2012, Lambert performed a series of shows with QUEEN across Europe as well as dates in Russia, Ukraine and Poland. They have since completed a number of tours and performed at some of the biggest festivals in the world.