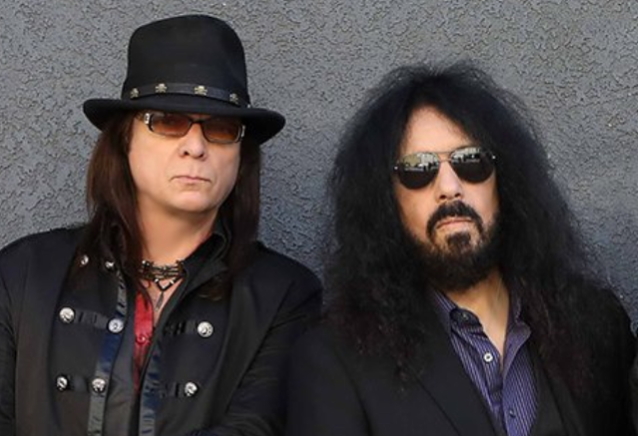 QUIET RIOT bassist Chuck Wright says that his bandmate Frankie Banali was "a very unique and special human being."

Frankie was diagnosed with stage IV pancreatic cancer on April 17, 2019 and given six months to live. He put up an inspiringly brave and courageous 16-month battle to the end and continued playing live as long as he could. Standard chemotherapy stopped working and a series of strokes made the continuation on a clinical trial impossible. He ultimately lost the fight at 7:18 p.m. on August 20 in Los Angeles surrounded by his wife and daughter.

Wright, who has been a part of QUIET RIOT, on and off, since 1982, having initially been involved in the "Metal Health" recordings (he played bass on the tracks "Metal Health" and "Don't Wanna Let You Go"), discussed his late friend in a brand new interview with Thomas Amoriello Jr. of Boston Rock Radio. Asked what his favorite part was of being one half of a rhythm section with Banali for all of those years, Chuck said: "Let's go back to the beginning. The band DUBROW, which later became the QUIET RIOT — 'Metal Health'-era band — had a great guitar player [Bob Stefan] that was also in my prog band SATYR. (We were the first band in history to use lasers and we packed wherever we played 1978 to around 1982.) Bob suggested me for DUBROW when Rudy [Sarzo] left to play with Ozzy [Osbourne] and Randy [Rhoads]. Kevin resisted by saying that I was too prog for them, but Bob said to him, 'No. Chuck digs bands like HUMBLE PIE and QUEEN.' So with that, I got an audition and the gig. Some months later, Bob had a temper tantrum at a Whisky A Go Go gig and Kevin fired him. I suggested Carlos Cavazo from the band SNOW, and we got together with the band's producer, Spencer Proffer, and checked him out. It was all the thumbs up.

"Frankie really taught me how to play back in the pocket, which is opposite of prog playing, which tends to be more on top of the beat.

"I'll never forget whenever Frankie felt I was rushing, he'd throw a drumstick at me. I quickly learned to lay back. Once I settled into playing with Frankie, we started having a serious psychic connection. I mean, he could throw anything at me and I'd be right there with him. That continued throughout our many years of playing together.

"Not trying to toot our own horn, but I believe we were the best hard rock rhythm section of the '80s era. Listen to the pocket on 'Bang Your Head' — that's how you groove.

"He will be greatly missed. He was a very unique and special human being."

Best known for his work with major touring acts, Wright has also been involved with over 100 recording projects throughout his stellar career.