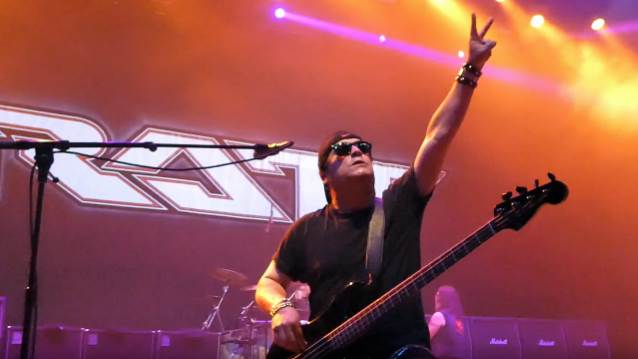 RATT bassist Juan Croucier has told Idaho's 94.9 & 104.5 The Rock radio station that he and singer Stephen Pearcy made a conscious decision to keep the identities of the band's latest additions a secret until the new lineup played its first show. "We both sort of agreed that in this day and age of social media, there's a lot of people out there with five-pound opinions," he explained (hear audio below). "We kind of figured that it would be best if we just walked up on stage and showed them who the lineup was.

"There's been a lot of speculation about a lot of things, many of which are very inaccurate. And so we just didn't wanna feed more into the hands of folks that have opinions already established," he continued.

"The group has been through a lot in recent years, some of which is not exactly flattering, and we're out to sort of change that and give it a level of class.

"Look, some things with rock bands are better left unsaid, and a lot of times when dirty laundry gets aired, nobody wins that," Juan added. "And that's kind of where we're coming from. We're a rock band and we wanna get out there and deliver for the fans and have a great time. We're the kind of guys that we realize life is tough enough for folks out there, and so if we can give 'em an hour, and hour and a half, what have you, of a good time, where they can kind of forget about the bills at home, or what have you, work, then we're happy to do it. That's what we're about."

"We went through a pretty intense audition process, and we were very meticulous, and then we rehearsed really, really hard to make sure that everything was true to form," Juan told 94.9 & 104.5 The Rock. "And we played Kansas Star Casino, and it was really, really good, and then we played in Costa Mesa, here in California, about a week ago, and that was just terrific.

"The band is really, really honoring the level of musicianship and quality that RATT has always tried to maintain," he said. "And the response has been positive."

Juan also declined to delve deeper into the circumstances that caused guitarist Warren DeMartini's exit from RATT, explaining: "Look, being in a band is a hard thing. It's really no different than, imagine working with your same co-workers 35 years ago… So it's not easy. People change, people's objectives and agendas change, and all Stephen and I are trying to do is keep the group moving forward in a positive way and give the RATT fans what they love, and what we love as well. So there's nothing really other than that.

"It's not easy keeping a band going — there's a lot of twists and turns — and it's hard sometimes to roll with the punches," he continued. "And, frankly, sometimes people decide, 'Hey, look, I wanna get off the ride.' So we're just dealing with it the best way we can and really looking at it in a positive way and trying to just do what would be expected."

Earlier in the month, Stephen told the "Trunk Nation" radio show on SiriusXM that "Waren just didn't wanna go out there" and play shows with RATT. "And when you have a corporation or a company, that company doesn't cease if the majority wants to move forward," he explained. "We wanted to clean house, and that's it, and go out and enjoy ourselves for once. Enough drama. We've been through enough."

Pearcy went on to stress that "Warren was not fired — he wasn't fired at all. He just took it upon himself to not be involved." But, he insisted, "I don't tend to dwell on things, so it doesn't bother me. I just move forward, and that's what we did. We wanna go out and have a good time and celebrate. It's no big deal."