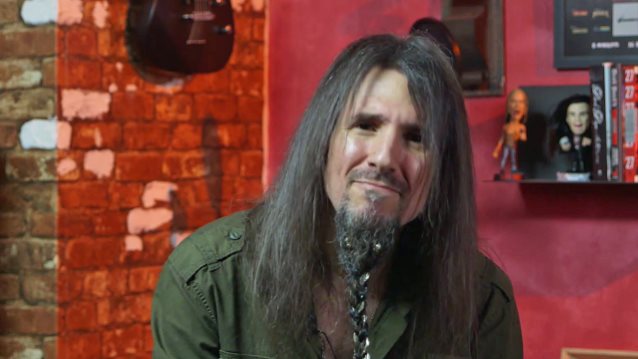 Ron "Bumblefoot" Thal has spoken out for the first time about his exit from GUNS N' ROSES, explaining that he knew it was "time to move on."

Just days after guitarist DJ Ashba quit GUNS N' ROSES in July 2015, a source confirmed to Detroit music writer Gary Graff that Thal was also no longer a member of the group — and had been out since the end of GN'R's second Las Vegas residency in 2014.

Thal later revealed that he was focusing on his solo career after spending eight years playing in GUNS. The guitarist, however, stopped short of saying that he was no longer a member of GUNS, which has caused some fans to criticize him for not coming clean about where he stood with the group.

Now in a brand new interview with Loudwire, Thal addressed his split with GN'R and talked about his relationship with the group's notoriously volatile singer Axl Rose.

The axeman said (see video below): "Anything I say [about GN'R] will end up [getting] turned into something bad that's gonna hurt people that I don't wanna hurt. And it just happens that way; that's what ends up happening, even if I don't mean it to. I could say, 'The sky is blue,' and somehow it'll get turned into something when it comes to that subject. So I try not to say too much about it. I try not to. I usually put both feet in my mouth.

"All I could say is you reach a time when you just know it's time to move on and you just know that what you've seen for your life, what you see the future of your life and what that is, it's not what you pictured for yourself."

He continued: "When I started playing music, I was six years old, and when I thought about what I wanted and what my goals were, and what makes me alive inside making music, and I just… I was looking at what I was doing, and it didn't match up. And I just needed to… I needed to go."

After revealing that he was fully aware at the time of his departure of Axl's plan to re-team with bassist Duff McKagan and guitarist Slash for a partial reunion of GN'R's classic lineup, Thal talked about his time in the band and the personal connection he felt to Rose during that period. He said: "Everybody [in the band] would hang out. Me, personally, my relationship [with Axl] was just… I don't know if I could compare my relationship to other people's. Sometimes it felt like friends, sometimes it felt like enemies. You know, we felt like bandmates."

Thal joined GUNS N' ROSES in early 2006 as the replacement for Buckethead.

The guitarist expressed frustration in 2013 with the lack of new music from GUNS, saying, "If something came out at this point, it would be very old material that is just being released now… We need to make an album of this band right now." The last new GUNS N' ROSES album, "Chinese Democracy", came out in 2008.