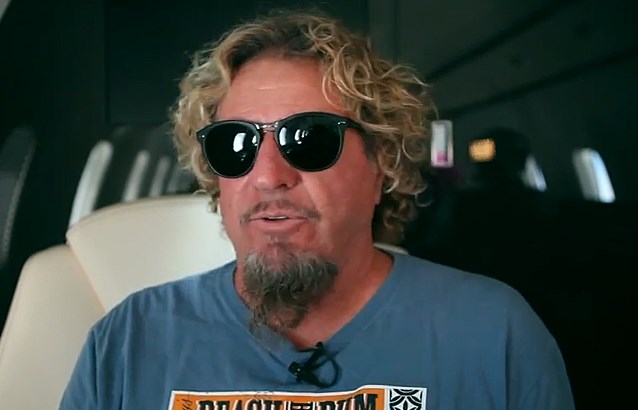 A five-minute clip in which legendary rocker Sammy Hagar talks about the creation of his first-ever rock collaborations album, "Sammy Hagar And Friends", can be seen below.

Hagar enlisted three legendary musicians — Toby Keith, Mickey Hart and Taj Mahal — to round out the final three tracks on "Sammy Hagar And Friends". The highly anticipated effort is set for release by Frontiers Records on September 24 in North America, September 29 in the U.K., and September 27 in the rest of Europe, and was preceded by the CD's first single and video for the high-voltage track "Knockdown Dragout" featuring Kid Rock, Joe Satriani and Denny Carmassi.

In addition to the 10-track standard edition album, fans will also have an opportunity to purchase a deluxe edition of "Sammy Hagar And Friends", packaged in a high-gloss digipak. The deluxe CD/DVD package includes an exclusive bonus audio track, "Space Station #5", recorded live at the Ronnie Montrose Tribute Concert held on April 29, 2012 in San Francisco, as well as the "making-of" album documentary which includes bonus video of the first single "Knockdown Dragout", and more.
"Sammy Hagar And Friends" track listing:

From new originals like "Knockdown Dragout" with Kid Rock, "Bad On Fords And Chevrolets" with Ronnie Dunn, "All We Need Is An Island" with Nancy Wilson, "Going Down" with Neal Schon, Michael Anthony and Chad Smith, and "Father Sun", a duet with his son Aaron Hagar — to reimagined covers of classics like BOB SEGER's "Ramblin' Gamblin' Man" and DEPECHE MODE's "Personal Jesus" — Hagar has masterfully assembled an album that delves into rock, country, blues and pop. "Sammy Hagar And Friends" is Hagar's first solo album since 2008.

The release of "Sammy Hagar And Friends" will follow on the heels of his "Four Decades of Rock" summer tour which kicked off July 26 in Tucson and will wrap on September 7 in his hometown of San Francisco. The 14-city tour celebrates Hagar's arsenal of hits from his career-spanning success as a solo artist, songwriter and frontman for VAN HALEN, MONTROSE and CHICKENFOOT. The tour, which features Hagar and his band, THE WABOS, will also see influential bandmates from his career, including Michael Anthony, Denny Carmassi, Bill Church and more joining him on select dates. Hagar and his lineup of guest stars will take fans on a hit-filled retrospective from the Red Rocker's prolific career. Fans can also expect some surprise "friends" to join Hagar on stage for a sneak peek of tracks from the new album.