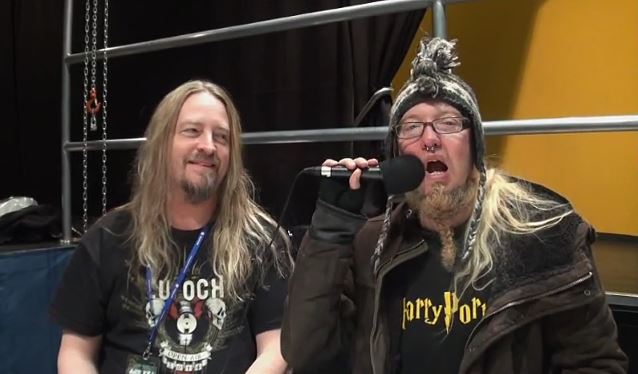 Mike of Planet Metal conducted an interview with vocalist Warrel Dane and guitarist Lenny Rutledge of the reunited '80s cult metal outfit SANCTUARY before the band's March 7 concert at Vz Komma in Wörgl, Austria. You can now watch the chat below.

Speaking about the fact that he is no longer hitting the same high notes while performing the SANCTUARY classics during the band's current tour, Dane said: "Well, you know, I'm not in my 20s anymore, so I have to be realistic and say… So, obviously, I'm not going to be singing like I've been sucking on a helium tank anymore. But at least, you know… I know people wanna hear these old songs, so you have to make an effort, at least. Yeah, it takes a little bit of practice, a little bit of rehearsing, and it all works out in the end, I guess. I hope people are happy. There's some people on the Internet that are pissed off that I don't sing it exactly the same as I did in 1988. I'm, like, really? C'mon! be realistic. I'm a human. I'm a flash machine. This is how it works. It's work. It's not easy. But you've gotta do it for people to show up at the shows."

Dane also addressed comparisons that some people have made between SANCTUARY's comeback album, "The Year The Sun Died", and the CDs that he made while a member of NEVERMORE. He said: "I think people are gonna say that this sounds like NEVERMORE because of one obvious reason: I'm singing. And I think for the bulk of many years, people have associated my voice with NEVERMORE, so, of course, when they hear this, they're gonna say it sounds like NEVERMORE. Whatever… But the music is completely fucking different. And people kind of overlook that and just focus on the vocals, for some reason. I don't know why."

Added Lenny: "It [the comparison] doesn't bother me. Honestly, I welcome it. I mean, if people… What I hope is that people can enjoy both [NEVERMORE and SANCTUARY] and that they like it. I don't agree with it, but if you think it sounds like that, but you still enjoy it… That's what I'm hoping. I really don't think the music sounds like NEVERMORE. In a way, that's kind of a compliment, because, I mean, I thought the NEVERMORE stuff was very complex and deep. So, to me, it's, 'Hey, great.' I mean, at least they're not comparing it to some horrible band. It could be worse."

Fan-filmed video footage of SANCTUARY's March 3 performance at The Underworld in Camden, London, England can be seen below.

SANCTUARY's European tour started with a very special headline show in London before they joined the mighty OVERKILL for a run of mainland shows. The trek will end with two headlining gigs in Greece.

"The Year The Sun Died" was released in October 2014 via Century Media. Recorded in Seattle at Soundhouse Studios with producer Chris "Zeuss" Harris (SOULFLY, SHADOWS FALL, HATEBREED, MUNICIPAL WASTE), the CD features 11 tracks. There was a deluxe media book, available exclusively at CM Distro in the United States, which featured expanded packaging and the bonus track, a cover of THE DOORS classic "Waiting For The Sun". The vinyl version came with a CD featuring this bonus track as well. The cover artwork for the album was created by Travis Smith (OPETH, NEVERMORE).

In 2010, four of the founding SANCTUARY members — Warrel Dane, Jim Sheppard, Lenny Rutledge and Dave Budbill — came together for a few select reunion performances. At first, it was just going to be a handful of shows, but the response and chemistry on stage was so overwhelming that the guys changed their minds. Now, some 20 years after they left off, SANCTUARY has continued with its unique mix of U.S. power metal, hard rock and progressive elements.

SANCTUARY released the classic albums "Refuge Denied" and "Into The Mirror Black" during its short existence between 1985 and 1992. Following the band's split, Dane and Sheppard formed NEVERMORE.