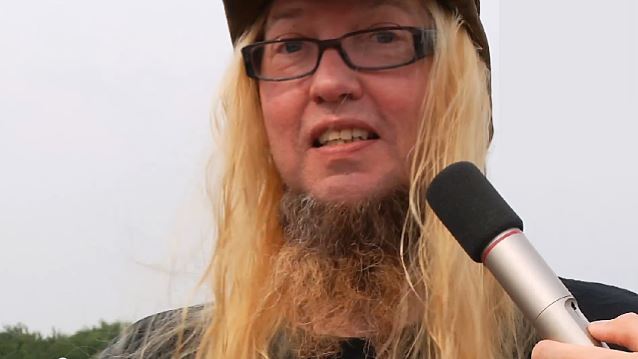 In a brand new interview with Germany's Rock Hard magazine, vocalist Warrel Dane of reunited metallers SANCTUARY spoke about the impact the rise of grunge in the early '90s had on the Seattle metal scene and how his other band NEVERMORE managed to survive during that period.

"That was a difficult time for metal bands in Seattle, because a lot of the people in the music community in Seattle had absolutely no respect for metal bands whatsoever," Dane said. "We definitely persevered and got through it. It was a little bit difficult at times, and we struggled, but we definitely got through it, and we survived, and a lot of these other bands that were looking down on the metal bands, they're not around anymore, but we still are, I guess."

Dane also spoke about NIRVANA, one of the most influential and important rock bands of the modern era whose reign was tragically cut short on April 5, 1994, when frontman Kurt Cobain took his own life following at least one earlier suicide attempt and severe bouts with drug addiction, a chronic stomach ailment, and depression.

"I love NIRVANA," Warrel said. "I know a lot of metal people like NIRVANA as well. I think Kurt Cobain was a genius, as far as a songwriter. Yeah, he was obviously a very tortured soul, and I think he's really missed by a lot of people."

According to Dane, Cobain's struggle with substance abuse, coupled with a myth in the media that Kurt glamorized drug addiction, led to a rise in heroin use among young people in Seattle.

"When Jim [Sheppard, NEVERMORE and SANCTUARY bassist] and I had the restaurant, we had a lot of kids that worked there with us that were worshipping Kurt and worshipping Layne [Staley, late ALICE IN CHAINS singer], and a lot of them were doing heroin because they thought it would make them cool, like Layne and Kurt. And that is so messed up. And heroin got so popular just because of that. [I was, like] 'These people are dead? Why are people wanting to do it? Because it's just gonna fucking kill you in the end. It was really, really weird."

SANCTUARY's comeback album, "The Year The Sun Died", will be released on October 14 in North America and October 6 in Europe via Century Media. Recorded in Seattle at Soundhouse Studios with producer Chris "Zeuss" Harris (SOULFLY, SHADOWS FALL, HATEBREED, MUNICIPAL WASTE), the CD will feature 11 tracks. There will be a deluxe media book, available exclusively at CM Distro in the United States, which features expanded packaging and the bonus track, a cover of THE DOORS classic "Waiting For The Sun". The vinyl version will come with a CD featuring this bonus track as well. The cover artwork for the album was created by Travis Smith (OPETH, NEVERMORE).