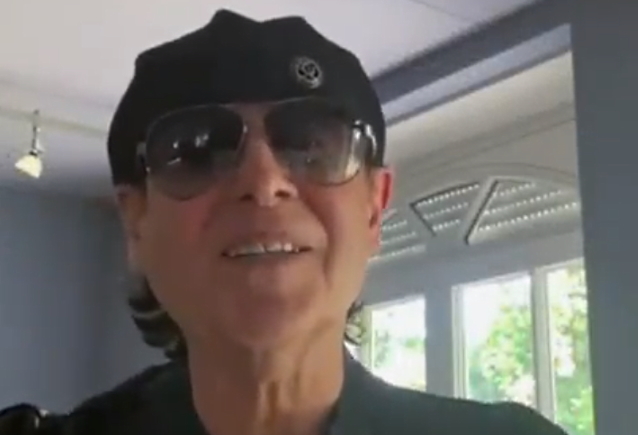 SCORPIONS are mixing their new album at the legendary Hansa Studios in Berlin, Germany with engineer Michael Ilbert, who has earned multiple Grammy nominations for his mix work with producer Max Martin on albums by Taylor Swift and Katy Perry.

Singer Klaus Meine, who celebrated his 73rd birthday on Tuesday (May 25), offered an update on the new SCORPIONS LP's production progress in a video message posted on the band's social media.

He said (as transcribed by BLABBERMOUTH.NET): "Hi, this is Klaus Meine. Well, it's been a rough ride for anyone out there. What a crazy year. But I do not want to complain. The pandemic gave us a lot of extra time to write new songs and get a whole new album on the way. We're in the mixing process right now, and we can't wait to get the album out for you guys to hear it.

"I'd like to say thank you from the bottom of my heart," he continued. "Thank you for all of the wonderful birthday messages. I tell you, it's really, really touching to feel so close to all of you in almost every corner in the world. Thank you so much for all your love and support in all those years. It's been a long, long journey.

"Because of the pandemic, the Las Vegas residency was, unfortunately, postponed again, and there's absolutely nothing we can do about it. But the good news is Las Vegas is still on, and we're gonna rock Sin City in March next year. So we're looking very much forward to seeing all of you in 2022 someplace sometime somewhere down the road, and I'm sure it will be very emotional. Until then, take good care of yourselves, stay healthy and well and get ready for the sting. We love you."

The German-Polish-Swedish hard rock legends spent the last few months recording their new effort at Peppermint Park Studios in Hannover, Germany. Tentatively due later this year, the disc will mark SCORPIONS' first release since 2017's "Born To Touch Your Feelings - Best Of Rock Ballads", which was an anthology of new and classic material.

SCORPIONS originally intended to record the new album in Los Angeles with producer Greg Fidelman, whose previous credits include SLIPKNOT and METALLICA. However, because of the pandemic, some of the initial work was done with Greg remotely, after which SCORPIONS opted to helm the recordings themselves with the help of their engineer Hans-Martin Buff.

Meine previously told Talking Metal that the goal with using Fidelman to produce the new LP was to bring "the old vibe from albums like 'Blackout', 'Love At First Sting' or even 'Lovedrive'. We try to focus on those albums and this attitude," he said. "If we get there, who knows — it's so many years later. But it's the spirit and it's the whole vibe around this album. This time, the focus is on the harder songs."

According to Meine, SCORPIONS' new LP features "no outside writers at all," unlike 2015's "Return To Forever", which was largely co-written by the album's producers, Mikael Nord Andersson and Martin Hansen.

SCORPIONS' last full-length collection of new recordings was the aforementioned "Return To Forever", partially comprising songs the band had in the vault from the '80s. It was the final recorded appearance of SCORPIONS' longtime drummer James Kottak, who was dismissed from the band in September 2016. He has since been replaced by Mikkey Dee, formerly of MOTÖRHEAD.

Thank you all for the Birthday messages - Klaus ?#scorpions pic.twitter.com/McygDOiElD