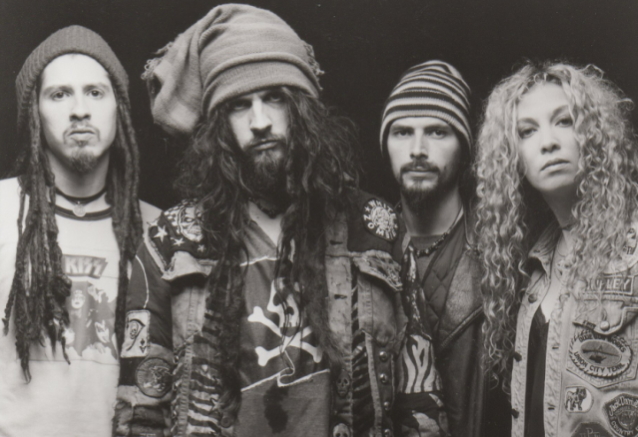 In a new interview with Ireland's Overdrive, former WHITE ZOMBIE bassist Sean Yseult was asked if working on "It Came From N.Y.C.", the 2016 box set collection of the band's early output, brought up a lot of old buried memories for her and whether she got any kind of closure from working on that project. She replied: "Yes and no... and yes and no. As you mentioned, it was mostly [guitarist] J. [Yuenger] and I and past members. Rob [Zombie] edited a lot of it out, and we let him out of respect. Some of it I understood, some I did not. In the end, I think there was enough new information and imagery in there for it to be something exciting for our fans."

WHITE ZOMBIE broke up in 1997 and Rob Zombie went on to launch a successful solo career in 1998. Asked if she feels that the band's split was the right thing to do or if she ever wonders, "What if we had just worked through it and kept going," Sean said: "No. We were burnt out and for various reasons, and with other people involved besides bandmembers, one in particular, Rob was in no way going to do WHITE ZOMBIE any further. J. and I had both agreed to do one more."

Pressed about whether she would be open to performing with Rob, J. and drummer John Tempesta again for a special occasion, like a hypothetical Rock And Roll Hall Of Fame induction, Sean told Overdrive: "I would."

Renowned music journalist Grayson Haver Currin, who wrote the liner notes to "It Came From N.Y.C.", told Observer in a 2016 interview that Rob waited until the very last minute to actually sit down and get interviewed for the project.

"Rob had initially agreed to it, and over the course of several months he did not fulfill his obligation," Currin explained. "And it looked like I was going to write the liner notes without Rob. But he got in touch at the 11th hour, and we had two talks. They were good. He was a little non-committal. The other members were very open about those days, but he wanted to play it a little cooler, because he's Rob Zombie."

According to Currin, Zombie pushed the project beyond its deadline, particularly when it came to fact-checking of the liner notes.

"So I finally put together the liner notes, and he had a fair deal of changes,” Currin explained. "It was mainly in reference to things that made him look bad, which was pretty much everything everyone else had to say about him. In fact, I have no idea how the final version of the liner notes read, because I gave up control at one point. It was clear Rob Zombie was not going to compromise on his points. The liner notes were totally approved and in production and he pulled them back, basically."

Rob Zombie told England's RockAAA in a 2011 interview that WHITE ZOMBIE will never reunite. He explained, "I don't see the point. I think as with most things people have a memory of something like, 'I saw them when I was 14 years old and it was the greatest thing ever,' but if they saw us now they'd probably go, 'I wish I hadn't seen that reunion; it was awful.' The singer added, "It is better to leave it alone. And I haven't talked to anyone from the band exceptJohn Tempesta [since the late 1990s]."

Rob later told The Pulse Of Radio that nowadays a lot of his audience isn't even familiar with the old WHITE ZOMBIE songs. "The crowds are really, really young and I've been noticing that with the set list too, because, you know, as the time has gone on, we've really worked the WHITE ZOMBIE material more out of the set, because we've been finding that it's not working like it used to," he said. "It seems like that those songs just seem now old to people and it's very strange."

The history of WHITE ZOMBIE came up when Rob Zombie was asked to comment on the publication of "I'm In The Band", a memoir from Yseult, who is also Rob's former girlfriend. In the book, Yseult claimed that the departure of drummer Ivan DePrume led to the eventual disintegration of the group.

Zombie said, "I have not seen it [the book] so I can't comment. I can barely remember those days, so I'm glad somebody can."

He added, "Everybody likes to make up stories which aren't true. I don't think that's fair. Ivan left the band, John Tempesta came in and the band sounded better than ever, we kept playing and made bigger records and did more tours so I don't see how that had anything to do with it."

In a 2015 Artisan News interview, Sean confirmed that Rob "hasn't spoken to any of [the other former members of WHITE ZOMBIE] since the band broke up."

Yuenger admitted to Crawdaddy! back in 2010 that he still harbored some resentment over WHITE ZOMBIE's demise. He said: "I would have liked to make another record, but it wasn't in the cards. On Rob's solo albums, you can see what he wanted to do, where he wanted to go. I always wanted to be in a rock 'n' roll band, where the primary instruments are guitar, bass, and drums, you know? We were living in New York City for all those years, hearing all the rap and techno coming out — my favorite bands back then were SLAYER and PUBLIC ENEMY. I was really all about sampling, and we put out 'La Sexorcisto' with all those samples, and it blew people away. We were like, the first rock band to do that. And it was great, I loved it. But as time went on, the sampling and techno stuff started to dominate everything, and I really hated it. Now you can hear how little humanity is in Rob's stuff."