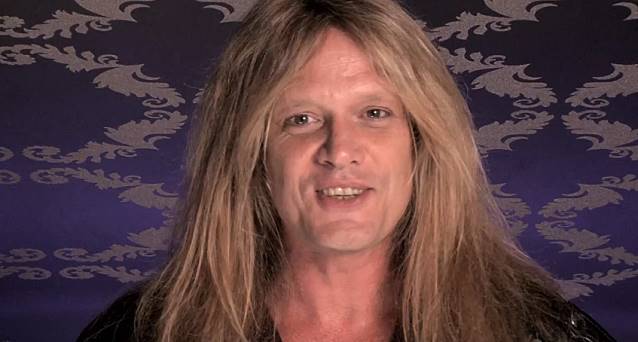 Jason Price of Icon Vs. Icon recently conducted an interview with former SKID ROW singer Sebastian Bach. A couple of excerpts from the chat follow below.

Icon Vs. Icon: How did your approach to this record differ than your past releases? Did you have a different way of going about things this time around?

Bach: Yes. My approach this time was to meet the deadline! [Laughs] I have never acknowledged a deadline in my career. I don't read record contracts that I sign because nobody is going to tell me what to do. Let's just assume a contract says, "You are Sebastian. We are the record company. You make the record; we will put out the record." What else could it say? But my management tells me, "Hey, dude, this is what you signed..." For example, I did a live DVD called "ABachalypse Now". I handed it in to the record company and then two weeks later they said, "You owe us a new record!" I was like "I just gave you a record! What the hell! What is this?" [Laughs] My manager tells me, "Yeah, dude. You signed this eight years ago." My first impulse was to say "Fuck this and fuck that!" Then I realized when I go to the store that it is hard to find CDs. They are going out of existence. They are still here but some would say, arguably, they are barely here. I said to myself, "Dude, some corporation is demanding that you rock and give them a CD!" [Laughs] "That is my favorite thing ever to do, so I am just going to do it!" I spent a year driving myself cuckoo and came up with an album that I could not love anymore than I do. I myself, objectively as fan of music, love it! I totally love it! [Laughs] That is a great feeling and the whole intention!

Icon Vs. Icon: What about the title of this one? What does "Give 'Em Hell" mean to you personally?

Bach: I am a comic book collector, my fans know that. It started when I was a little kid. That term, the saying itself, really appealed to me. I pictured the covers of "Sgt. Rock" or "Enemy Ace" that I used to buy, the war comics. "Give 'Em Hell! Get in there, boy! Give 'Em Hell!" That is kind of what I feel I do when I walk on stage. I feel like it is my mission to go in there and give 'em hell! [Laughs] I also like titles that are fun to say! If anybody remembers the reality show I did with Ted Nugent, "Supergroup", one of the most famous lines that everybody quotes to me is "Hey, Savage Animal, it rolls off the tongue!" I don't know if you remember that but a lot of people love to say that to me in public! [Laughs] I am happy to say that "Give 'Em Hell" rolls off the tongue! [Laughs] "Give 'Em Hell" could have been the name of the SAVAGE ANIMAL record but since there is no such thing; I used it for Sebastian Bach! [Laughs]

Icon Vs. Icon: What can you tell us about the process of bringing the songs on "Give 'Em Hell" to life? Did you go it about it any differently than with you previous records?

Bach: Yes, actually. In order to meet the deadline for this album, I was forced to approach lyrics a little differently than I had in the past, especially with the work in SKID ROW. I would spend an insane amount of time on two lines of a song like on "Monkey Business". Those lyrics are so abstract. "Kangaroo lady with her bourbon in a pouch, Can't afford the rental on a bamboo couch. Collecting back her favors 'cause her well is running dry, I know her act is terminal but she ain't gonna die." You can't come up with those kinds of lyrics when looking at a deadline. That is like poetry you bring in; do you know what I am saying? It was just a different way of doing things from what I am used to. On "Give 'Em Hell", sometimes it would be my turn to sing and the night before I would rack my brain to think of words, just like on "Monkey Business" or whatever. I wouldn't be able to finish the song I was supposed to start the next morning. The producer would say, "Are you on your way?" I would be really bummed out and say "No, dude. I am not done." He would say, "Well, just come in anyway." I said, "No. I'm not finished." He said "Just show up." And I go, "Why? I am not done." He said "Just fuckin' come in!" [Laughs] I said, "OK!" [Laughs] I would trust him and just stand up and sing without any thought. That wasn't the case with all of the songs but some of them. Some of the songs on this record came super easy but some of them took a long time for me to think of something that was going to be as cool as the music itself. I would step up to the mic and phonetically vocalize some parts. Bob [Marlette] and I would look at each other and say, "That is really fuckin' cool." Then I would fit words to that instead of the other way around. I think it is a cool way to do it. When I watch old documentaries on THE ROLLING STONES, I find that is kind of the way they would do things. It is almost like jamming in a way; you are feeling the moment in the room and building from it. That was the biggest difference. I had not approached a record in that way before. When I listen back, all of the vowels and stuff like that really make sense and sound natural in the song. The entire album sounds like that!

Icon Vs. Icon: I know you put a lot of emphasis on the production and mastering of your work.

Bach: Yeah. As a human being, not as a rock star, I am an insane fan of metal. I am the Eddie Trunk of being a guy in a band! [Laughs] I know my metal! I am an audiophile! Put "Slave To The Grind" on you and listen to it with your headphones and then listen to "Give 'Em Hell". I was like this in 1991! I love the sound of a kick-ass guitar riff and a great drum sound. I love this stuff! You'd be hard pressed to find a dude who loves it more than me. Anyone who knows me will tell you this. I always get in trouble when I speak honestly in interviews but when you listen "Slave To The Grind", that is me with [producer] Michael Wagener behind the board being metalheads. This is who I am and always will be! It has been over 25 years of this sound and I am not going to stop. I am not going to start sucking now! [Laughs]

Icon Vs. Icon: You have been very successful in all of your musical endeavors. Is there still musical ground you are anxious to cover?

Bach: All I want to be is like my heroes — RUSH, Neil Young, THE ALLMAN BROTHERS, Willie Nelson, KISS, BLACK SABBATH and JUDAS PRIEST. I just want to be myself, make my music and then I will be dead! [Laughs] There is nothing else! I just want to keep doing this, to keep creating and I will! I am lucky! When I listen to this new album, I think "Man, you can do this forever." If I was going to start sounding drastically different, it would have already have started happening. I am knocking on wood here but if I can make "Give 'Em Hell" in 2014, there is nothing holding me back from rockin' forever! What a great line that is! [Laughs]

Read the entire interview at Icon Vs. Icon.