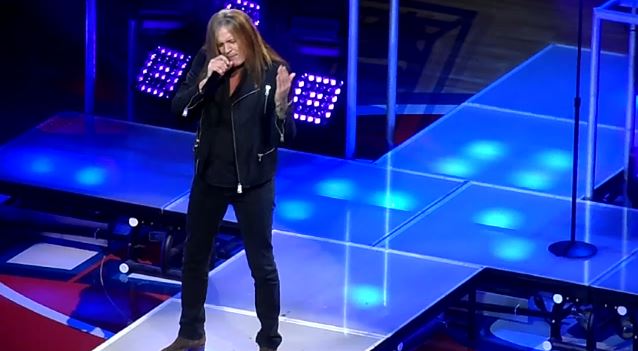 Former SKID ROW singer Sebastian Bach performed during the halftime show of the NBA game featuring the Detroit Pistons and the Milwaukee Bucks on Friday, November 7 at The Palace Of Auburn Hills in Auburn Hills, Michigan. Fan-filmed video footage of his appearance can be seen below.

Bach's new solo album, "Give 'Em Hell", sold around 4,000 copies in the United States in its first week of release to debut at position No. 72 on The Billboard 200 chart. Released on April 22 via Frontiers Records, the follow-up to 2011's "Kicking & Screaming" was once again produced by Bob Marlette, who has previously worked with ROB ZOMBIE, BLACK SABBATH and SHINEDOWN, among others.

Sebastian managed to involve in the writing and recording some very special friends and guest stars, including none other than Duff McKagan (VELVET REVOLVER, GUNS N' ROSES), and not one but two top-class guitar players: John 5 (MARILYN MANSON, ROB ZOMBIE) and Steve Stevens (BILLY IDOL). Rounding out the lineup on the CD are Devin Bronson (AVRIL LAVIGNE, PINK) on guitar and Bobby Jarzombek (HALFORD, RIOT, FATES WARNING) on drums. Duff and Sebastian previously collaborated on Duff's solo album "Believe In Me".