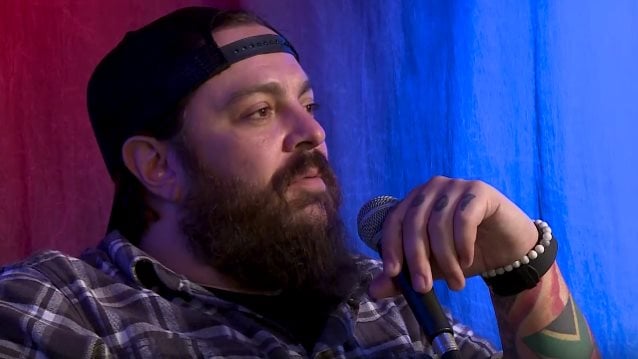 In a brand new interview with HardDrive Radio conducted earlier today (Friday, July 21), SEETHER frontman Shaun Morgan was asked what his initial thoughts were when he first heard about the passing of LINKIN PARK singer Chester Bennington. "My first reponse was disbelief," Shaun said (see video below). "I would never have guessed that somebody like Chester would be in a situation like that.

"I was a big fan of all the music," he continued. "I even saw merit in this album ['One More Light'] that everyone was so up in arms about. I figured musicians do what musicians wanna do. So let them live their lives.

"I was looking forward to seeing them on tour, I was hoping to run into them out on the road.

"There's just this whole level of disbelief, because he was so young, and we're all still so young in that sense. You'd expect this kind of thing… Well, I mean, there's no age limit, really, is there? It's just really, really sad. I feel really bad for his family and I feel bad for his wife and the kids especially. I feel bad for the fans. A really big piece of a lot of people's lives is now missing. And at least the only solace we can take from that is that he left behind an extensive catalog of music that we can listen to, and we can then comfort ourselves that his voice is still there to listen to."

Morgan, whose brother Eugene committed suicide ten years ago, added: "I remember when I was fifteen or sixteen and Kurt Cobain [NIRVANA] died, I was devastated, 'cause he was the voice for me, he was the guy that I listened to when I needed the solace that I needed to find that I couldn't find anywhere else. And when he died, I was absolutely devastated, and I imagine there are many, many people that feel that way now too. I just listened to the music as much as I could, because that's all I had.

"I think the saddest part, though, for me, then and now, is that there's no more to come, which is heartbreaking.

"[Chester] was a great guy, by all accounts, so I just think it's… I mean, I don't really feel like it's my right to weigh in. I feel bad for everybody involved."

SEETHER's fifth annual Rise Above Fest, the largest suicide awareness event in the world, will be held this Saturday, July 22 and Sunday, July 23 at Darling's Waterfront Pavilion in Bangor, Maine. It will feature performers including KORN, SHINEDOWN, STONE SOUR, SKILLET, HALESTORM, FALLING IN REVERSE, and more.

"Losing another great rock voice to suicide yesterday is absolutely tragic and heartbreaking," said Morgan in a statement. "It's exactly why we are doing what we set out to do this weekend — to build awareness for this mental disease. I started this festival as a tribute to anyone who has lost someone. If this festival does something to help one person reconsider the tragic choice of suicide, then it will be the greatest success of my career. We will honor the memories of Chester Bennington and Chris Cornell and dedicate this weekend to them."

Morgan, Rise Above Fest's founder, was honored in 2016 with the "Artistic Expression" award from the National Council for Behavioral Health at the Awards of Excellence in Las Vegas. 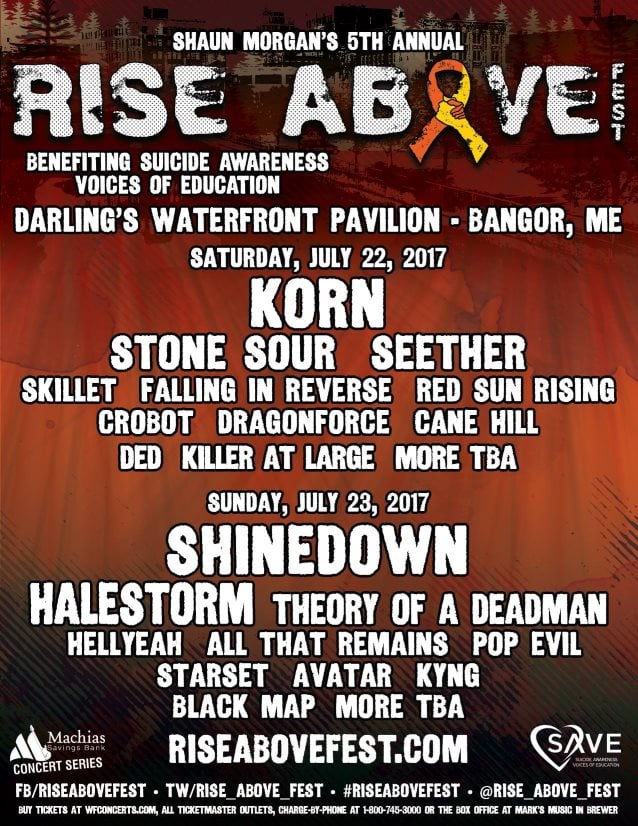