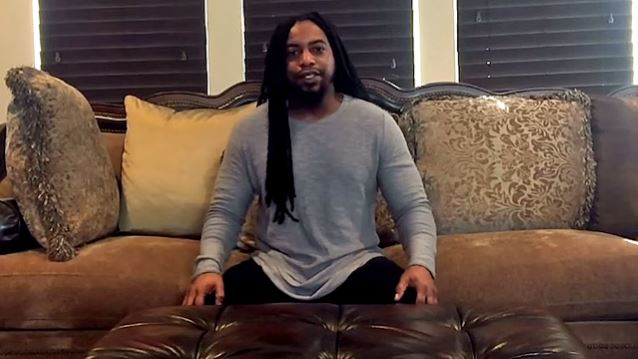 On February 18, Jack Antonio of the "Do You Know Jack?" radio show conducted an interview with SEVENDUST singer Lajon Witherspoon. You can now listen to the chat using the Spreaker widget below.

Asked about SEVENDUST's first-ever Grammy nomination, which came this year for the band's song "Thank You", Lajon said: "I feel like the nomination at least got us into an avenue that we weren't before. The Grammy, for me, has always been a dream come true, just 'cause as a kid I always grew up watching the Grammys, and then to now be an artist, and been an artist with this band for twenty years, to be there… just to be able to walk the red carpet with my family and have them… all that stuff was great."

Witherspoon also had kind words for Swedish occult rockers GHOST, who took the "Best Metal Performance" Grammy this year. "Hey, my hat's off to them," Lajon said. "Obviously, if it would have been me voting, I would have voted for SEVENDUST [laughs] at the end of the day, of course. But I'm happy all around. And my hat's off to GHOST that won, and I hope they do big things with it and wear it well. And you would never hear anything bad from me, because I just feel like bad energy… If you don't have anything good to say, then I'm not gonna say it; I'm a true believer in that. So I'm happy with everyone that was there and all the people that won the Grammys. What a feat to accomplish."

Lajon talked in more detail about his experience attending the Grammy Awards for the first time. He said: "It was really cool, because me and a buddy of mine, James Shields, the baseball player for the Padres, really took care of me and the family and kind of made this… We kind of looked at it as a once-in-a-lifetime trip, so we did it real big. We stayed right across the street."

He continued: "The red carpet was nothing like I would have even thought it. I thought it was gonna be this red carpet and you kind of just walk down this little thing and they've got pictures taken. It was inside a humongous tent and it went on for miles. It was pretty cool, man, to have the different people want to talk to you and take pictures. And just the whole energy was contagious for the Grammys for me."

SEVENDUST has announced its first U.S. headline tour in support of the band's latest album, "Kill The Flaw". The trek kicks off on April 26 in Baton Rouge, Louisiana and wraps up on May 28 at the Rocklahoma festival in Pryor, Oklahoma. The headline dates, which will feature special guests TRIVIUM and LIKE A STORM as show openers, will make stops in Atlanta, Georgia; New York, New York; Baltimore, Maryland; and Reading, Pennsylvania, to name a few. SEVENDUST will also be making stops at multiple festivals while out on the road, including Fort Rock, Welcome To Rockville, Carolina Rebellion, Northern Invasion, Rock On The Range and Rock Derby.