Multi-platinum rock band SHINEDOWN is hitting the road and returning to the stage this fall with a string of new headlining tour dates. Kicking off September 10 in Newark, New Jersey and wrapping October 9 in Orlando, Florida, the tour will see the band bring their exciting live performance backed by their biggest, most eye-popping production yet to arenas in Minneapolis, Milwaukee, Oklahoma City, Houston, Tampa, and more. THE STRUTS and ZERO 9:36 will support on select dates.

SHINEDOWN frontman Brent Smith comments: "Our number one priority has and will always be the safety of our audience. We are elated to finally be able to announce the return of live music. We want to thank all of the fans/family for their patience and understanding over the course of the last year and a half. We know the power of music, and song is what brings us together and unites us ALL."

Last weekend, SMITH & MYERS — the duo comprised of Smith and SHINEDOWN guitarist Zach Myers — embarked on its sold-out spring tour that will see them perform in Nashville, Kansas City, Cincinnati, Omaha, and more as they dive into their new double album, "Smith & Myers Volume 1 & Volume 2", out now via Atlantic Records. All COVID-19 safety protocols will be followed in adherence with state guidelines.

Two months ago, Smith revealed that SHINEDOWN was in Malibu, California working with Grammy Award-nominated multi-platinum songwriter and record producer Dave Bassett on material for the band's upcoming album. The follow-up to 2018's "Attention Attention" is being recorded in part at bassist and producer Eric Bass's new studio in Charleston, South Carolina for a tentative late 2021 release.

Last September, Smith told the KLOS radio show "Whiplash" that he and Bass were looking to make a more organic-sounding album this time around.

"We've kind of proven that we can make these very large records, these very cinematic, orchestrated records with this wall of sound," he said. "What we wanna try to do with this album is we do want to hone it back down to drums, bass, guitar and vocals and the best songs that we can write and the freshest songs we can write with the most tenacity and the most ferociousness that we can express. So I don't think this time around we're going to necessarily look at the handbook of, 'Let's layer this record like we've layered other records, and let's keep adding to it so that it grows.' I think more the idea of big mono on this album, it's more about stereo and putting all of the sonics down the middle. But you don't have a hundred tracks on a song; you don't take a 22-piece orchestra and bring it in there. We've done that, and we've done those kinds of records, and we love those records, and we love that sound, but I think what we wanna do with this next record is we really want to focus on being a four-piece band, and let's see if we can peel the paint off of the walls with just the fury of the four of us in a room."

In August, SHINEDOWN broke the record for the most No. 1s ever in the 39-year history of the Billboard Mainstream Rock Songs chart, scoring its 16th No. 1 hit with "Atlas Falls". This also marked the band's 17th No. 1 on the Mediabase Active Rock chart and its sixth consecutive No. 1, following "How Did You Love", "Devil", "Get Up", "Monsters" and "Attention Attention".

Originally written in 2013, "Atlas Falls" was first made available from SHINEDOWN's vault in March 2020 as part of an exclusive song and T-shirt bundle for the band's COVID-19 fundraising effort. 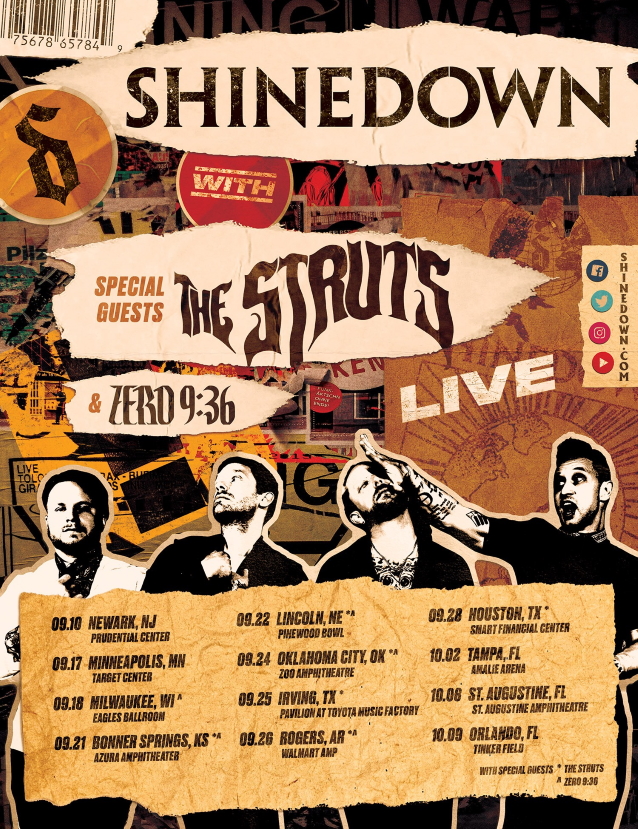