The tentative track listing for the effort is as follows:

Commented Scott Kelly: "We are all in a bit of shock that we have created this thing, a collaboration between guys who genuinely listen to, like and respect each other's music at the deepest level. All of us have spent years (like 80 some!) working in this church, paying our penance and giving our blood (not to mention saying our prayers and taking our vitamins). Somehow here we are now.

"Experience is like a constantly moving and expanding train that keeps picking up more and more passengers as it cuts through the mountains and the plains. The SHRINEBUILDER experience train is fuckin' long, long, long and it's rolling strong. The sheer weight of it all pushed this thing into another realm the moment the decision was made to do this. The fifth member of SHRINEBUILDER is the godhead. This record honors the traditions set forth by all those that walked through these endless halls before us.

"I have to take a moment to speak about these guys as individual musicians from my perspective.

"Dale Crover and I met when MELVINS first came to the Bay Area in 1985, they played their first gig at the New Method Wharehouse in Emeryville in which NEUROSIS had recently been born. We stood in amazement as they blew the place apart. From that point forward they have always been the one and only band that sets the bar. Unparalleled. If you asked the members of NEUROSIS individually who the best drummer they had ever seen was it would be unanimous, Dale Crover. Playing with him is electric. Dale's ability behind the mixing desk was unknown to me, now I know. Soon, you will too. Once we had this stuff together he drove it to where it needed to be. Uncompromising. Thunder. Thank you Dale.

"Wino and I actually only met recently, somehow the years of touring, bad luck and wreckage that we share kept us from crossing paths. We now know why it had to wait. If we had met earlier, we would have already collaborated and this wouldn't have the shine to it that it does. When you listen to his catalog of music, you will find richness, depth, spirit, and tone. Tone and riff are the two most important tools in a guitar players toolbox. No one, NO one has more tone and riff then this man. The richness, depth, and spirit are just character traits that pour out of his music. He is a true warrior for sound. Wino has been the keystone of this idea from its inception. It wouldn't have been worth doing and it wouldn't have happened if he hadn't been part of it. Lightening. Thank you, Wino.

"Al and I have been close friends for a long time, something like 20 years, we have been to the mountain top and the depths together well before this time. OM is one of my very favorite bands ever. And I mean like deserted island favorite. If I could have two, it would be OM and HANK WILLIAMS. There is a rhythm within Al that permeates every aspect of his being and it is at the center of his music. He has really been the point man in this project and that has a lot to do with how it has turned out. If it had been any other one of us, it would have turned out a lot differently. Soul. He and Dale together is beyond words. Thank you, Al."

(Photo below was taken by Julie Patterson) 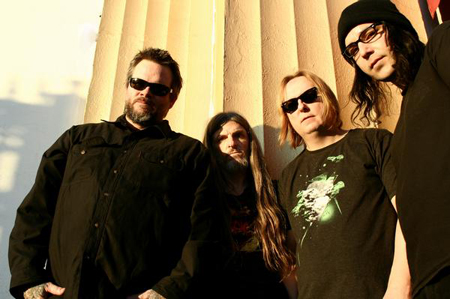