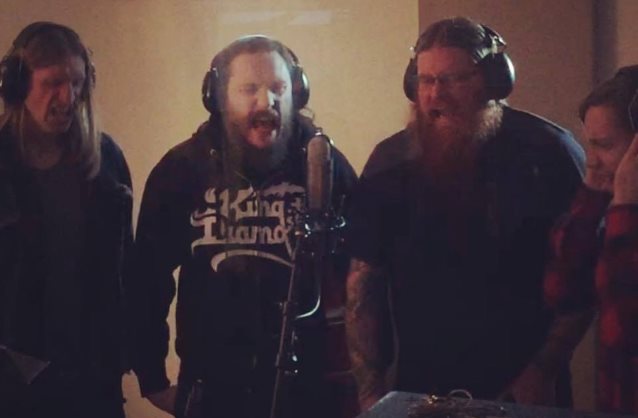 SKELETONWITCH recently completed recording a new EP, the Ohio quintet's first new material since 2013's critically acclaimed "Serpents Unleashed". The as-yet-untitled release — tentatively due out this summer — was recorded last month with Kevin Bernsten at Baltimore's Developing Nations (NOISEM, MAGRUDERGRIND, MUTILATION RITES) and will feature the group's new vocalist, whose identity will be revealed in the coming weeks.

Next month, SKELETONWITCH will return to the road as part of the annual Decibel Magazine Tour alongside ABBATH, HIGH ON FIRE and TRIBULATION. SKELETONWITCH guitarist Scott Hedrick stated about the trek: "All three artists are in my personal top tier of heavy music. Definitely going to have some embarrassing 'fan moments' on this one. Just ask Matt Pike — as an overly excited teenager, I punished him with a game of 20 Questions when I saw them on their first U.S. tour. He still regrets giving me his phone number! New tunes, new singer, new tour, new chapter for SKELETONWITCH. Looking forward to seeing you all out on the road."

Formed in Ohio over a decade ago, SKELETONWITCH has received considerable acclaim for its trademark 'blackened metal," which Metal Hammer calls "a potent brew of everything that makes metal so brilliant, vital and special." Their most recent release, "Serpents Unleashed", debuted on The Billboard 200 chart at No. 62, the highest chart position of their career. Recorded with Kurt Ballou (CONVERGE, HIGH ON FIRE), "Serpents Unleashed" was lauded as a "punchy, potent slices of blackened thrash, death metal and plain ol' heavy metal" by Decibel magazine, which included the album in their 2013 Top 40 list.