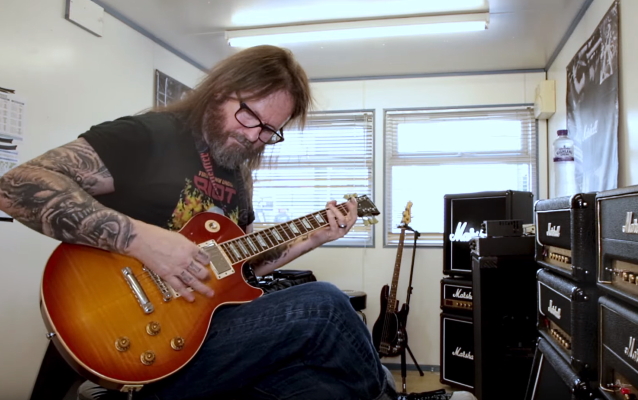 Marshall Amplification hung out with SLAYER/EXODUS guitarist Gary Holt at the U.K.'s Download festival this past June to try out the new Studio Vintage Series and talk all things tone. Watch the video below, and learn more about the Studio Series at this location.

In a June 2012 interview with Full Metal Jackie's nationally syndicated radio show, SLAYER's Kerry King stated about Holt: "I always regard Gary as the Glenn Tipton of our era — really good, really polished and nobody talks about him. To this day, nobody really references [JUDAS] PRIEST and Tipton that much as guitar players and I feel the same way about Gary. EXODUS have a huge following but a little more overlooked than METALLICA, MEGADETH, SLAYER, ANTHRAX — the 'Big Four,' so to speak, so [it is great] to be able to bring him to the forefront and shove him down people's throats and say, 'Hey, this motherfucker kicks ass. Pay attention.'"

Holt joined EXODUS in 1981 shortly after their formation, and has been the band's main songwriter ever since. Holt has performed on every EXODUS album, and is considered highly influential in the world of thrash metal. In 2011, he began filling in for SLAYER guitarist Jeff Hanneman at live shows, and became the band's full-time co-guitarist as of 2013, while remaining a member of EXODUS. In October 2014, EXODUS released its tenth studio album, "Blood In Blood Out", on the Nuclear Blast label.