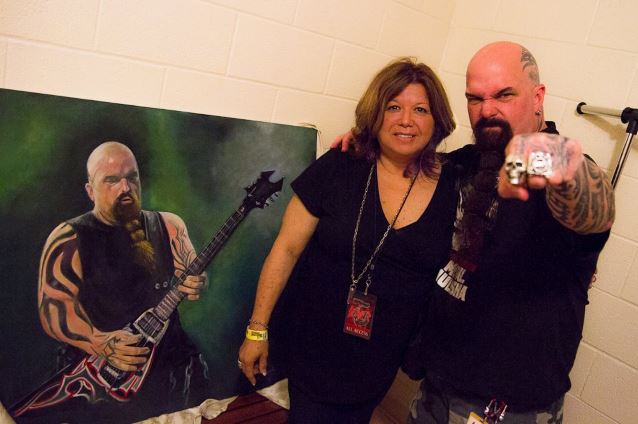 SLAYER bassist/vocalist Tom Araya's 55-year-old sister Jeanette Araya has released a book titled "Bloodline" about their family life and how it was affected by her brother's role as the frontman of one of the most influential and controversial heavy metal bands of the last 30 years.

Official description of the 122-page book: "In 2002, Jeanette Araya unexpectedly lost her father. As her world crumbled and the darkness of grief surrounded her, Jeanette found solace in writing and sharing family stories with her siblings. Years later, Jeanette shares a touching, occasionally edgy, memoir that reflects back on her father, Javier Araya, and her family life growing up.

"Through a chronological retelling, Araya returns to her father's origins and early life in Chile and continues through the family's eventual emigration from Chile to a new life in Los Angeles. Araya's anecdotes reveal her father's mid-life challenges as he began an internal struggle that soon led him to a different purpose of serving God. While her father battled to support his family by any means necessary, Araya details how her brother ventured into the heavy-metal music scene, causing new tensions in the family as her father grappled between honoring his faith and feeling proud of his son's success.

"'Bloodline' shares a heartwarming, emotionally-charged remembrance of a Chilean man's journey and the family who loved him as his life comes full circle from his upbringing to his final moments on Earth."

"Bloodline" was made available on August 28 through Archway Publishing and can be purchased via Amazon.com.

Back in 2008, Jeanette sent the following overview of her story to BLABBERMOUTH.NET:

"The story begins with the ending of my father's religious life and the climax of my brother's career as the lead singer for the controversial band SLAYER. Then I take you back to the 1930s to central Chile to the beginning of my father's life to understand the struggles that a man faces during a lifetime to overcome poverty. The controversy he faces in his later years with money and Satan as a young boy from a poor family whose struggles for survival were traumatic and inspirational.

"Being one of the youngest of seven children of an abusive alcoholic father and a nurturing, soft-spoken mother, religion was the only safe and consoling gift that guided his life and his dreams. He loved school and math was his favorite subject, but had to quit school and go to work to help his family when he was only eight years old. As a child, he loved to play soccer with a team of friends, he loved bright colors, music and he always dreamed of flying; flying made him feel closer to heaven. He married at twenty years of age, and by the time he was thirty, he had five small children and had began reliving his father's drinking pattern and infidelity. He decided to make a major change in his life. In 1965 he headed for the States where money grew on trees and everyone lived trouble-free.

"With little money in his pocket, no knowledge of the English language, little education and a dark complexion in the 1960s, he landed at LAX California and within six months he sent for his family. He worked for a dollar an hour. Later he took on another job and began working 16-hour shifts. Within a matter of two years, he purchased his first home in the U.S. and two more children were born; now we were seven. He ran a tight ship — religion, respect and the belt to insure the two. We didn't have much money, so during those long hot summer vacations we entertained ourselves by doing backyard shows for the neighborhood kids, something like 'The Little Rascals'. We would lip-sync to pop songs and played makeshift instruments. As time went on, the shows got more elaborate and my brother's interest in music became a passion and religion became Dad's.

"In the late '70s, my brother Tom joined a heavy metal band and disrupted the quiet harmony of our 'normal lives.' Dad was unaware of the aggression and the message in the lyrics of the band and was very supportive and proud of my brother. But when the visual images of the nature of the songs began to surface, he was crushed. He had become a minister at the local church and belonged to many healing and prayer groups. He gave communion on Sundays he assisted in all baptismal [services] and funerals; church had become his life.

"One day, after a prayer group meeting, this lady approached my father with tears in her eyes and asked him for help. She began explaining to him about the difficulties she was having with her teenage son, that he had become satanic and pleaded with my father to come to her house and do a healing prayer session, So my father agreed and took my mother along. When they entered the house, the boy was sitting there and was very upset at his mother for doing this. My father thought he would be more comfortable if they prayed with him in private so he asked the boy if it would be better if they prayed in his room. When they walked into the boy's room, my father's face became pale and my mother was very nervous. The first thing the saw was a poster of SLAYER on the wall with my brother's picture dead center. So SLAYER was one of my father's biggest challenges in life because of the love he had for his son and the financial support that he needed from him at the time."

When asked if her book was being written with Tom's consent, Jeanette told BLABBERMOUTH.NET in 2008: "I don't know if I have his consent, but I do have his blessing. And yes, he is involved." 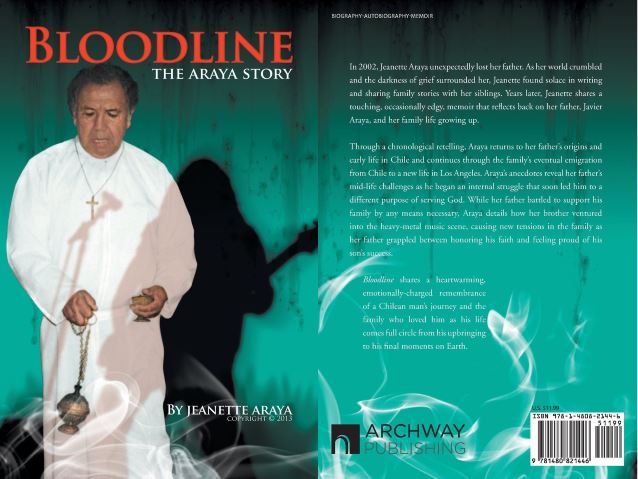