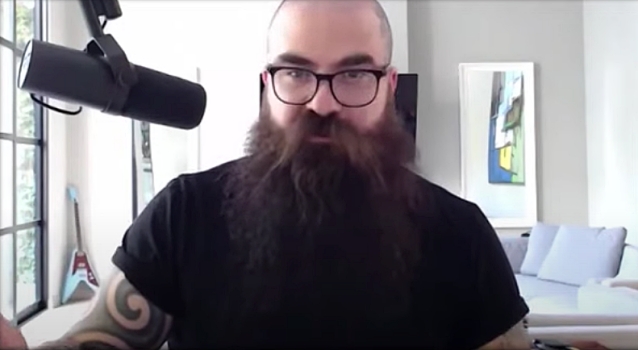 SLIPKNOT bassist Alessandro "VMan" Venturella recently chatted with Daniel DeKay on the latest episode of "Defender Of The Riff" on the Knotfest Twitch channel. Venturella discussed his musical upbringing, starting with clarinet into piano and eventually progressing to classical guitar at age 11. It's around this time Vman discovered GUNS N' ROSES' "Use Your Illusion II" album, which acted as his gateway into heavy metal. He revealed that his first concert was Ozzfest '98 at Milton Keynes Bowl, and spoke about how he started CRY FOR SILENCE, played shows with KNUCKLEDUST and STAMPIN' GROUND at an early age and more.

Regarding how he got into heavy metal, Alessandro said: "[In] secondary school, [I] started noticing there was little groups, and everyone had their little pockets of stuff that they listen to. And I think I kind of stumbled across people that were listening to metal from the older years. I always kind of looked older than the age I was, so I always hung around with people [who were] three or four years older than me. So I kind of got into heavy metal pretty [early]. [When I was] 13 or 14, I was listening to GUNS N' ROSES. I know it's not heavy metal, but it led to other things. It was a stepping stone."

He continued: "For me, I think it was [GUNS N' ROSES'] 'Use Your Illusion II' [album that my introduction to heavy music]. There's some serious work going on on that record, I think… So I think 'Appetite [For Destruction]' actually came afterwards for me, just because no one was, like, 'You've gotta listen to this one now.' There was none of that when you were, like, 13 or 14. It was, like, 'Here's a fucking bunch of shit. Listen to it.' It was kind of a process of elimination of what you wanna listen to and agree on. So, my brain went that way."

Venturella began working with SLIPKNOT during the recording of 2014's ".5: The Gray Chapter" album, contributing bass tracks along with guitarists Jim Root and Mick Thomson and former touring bassist Donnie Steele. He made his live debut with the band in 2014 at the first annual Knotfest.

In 2019, Alessandro told Bass Guitar Magazine that he landed in SLIPKNOT after getting a phone call from Root while working with MASTODON as guitarist Brent Hinds's tech.

"Me and Jim became friends while I was teching," Venturella said. "He was asking if I knew any bass players. When I found out what for, I put my hand up right away. He pointed out, 'But you don't play bass?' and I said something to the effect that I could do whatever he needed from me. Then I just had to make sure it was true."

According to Venturella, his role early on in SLIPKNOT was to "fill a great man's shoes and do him justice," referring to original bassist Paul Gray, who passed away in 2010. "My approach isn't the same as Paul's. I can't be him and never will be; every player is ultimately born different. That said, if you listen to Paul's note choices on 'Vermilion', he was all over the shop and it sounded great. I wanted to try things like that.

"After listening to his stems, I honestly looked at bass in a different light and understood how to support everything as the backbone," he continued. "Take the bass out of the mix and everything will fall flat on its arse — and equally, if you mix too bass-heavy, you're not going to get your point across either. Lead guitarists, on the other hand, always need to cut through because that's what the job entails. As the rhythm section, we're there to hold the fort."

Gray passed away in May 2010 from an accidental overdose of drugs.